1. The process of distribution of water from main canal to branches is termed as canal regulation.
a) True
b) False
View Answer

Answer: a
Explanation: The water enters the main canal from the river and this water has to be divided into different branches, distributaries in accordance to the relative demand on these different channels. Therefore this process of distribution of water is called as canal distribution.

2. The discharge value of water is controlled by?
a) Hydraulic Jump
b) Falls
c) Regulators
d) Velocity of the flow
View Answer

Answer: c
Explanation: The discharge value of water has to be adjusted to any value necessary to distribute the water effectively. This is done with the help of regulators.

3. By using canal regulation works we can control discharges, depths, and velocities in the canals.
a) False
b) True
View Answer

Answer: b
Explanation: Canal regulation works are the structures constructed in order to control and regulate the discharges, depths, and velocities in the canals. These structures ensure the efficient functioning of the irrigation canal system.

5. What is the angle made by this off taking channel with parent channel?

Answer: b
Explanation: This off taking channel makes a zero angle with parent channel initially and then separates out in transition. This is the best ideal alignment.

6. When does the alignment depicted by the following diagram used? 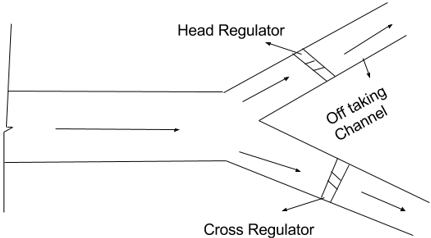 Answer: d
Explanation: The transitions from the main channel to the off taking channel have to be designed properly so as to avoid the accumulation of silt or say silt jetty. So therefore to serve as an alternative to the transitions both the channels have to make an angle with the parent channel upstream of the off take.

7. What does the below diagram represent? 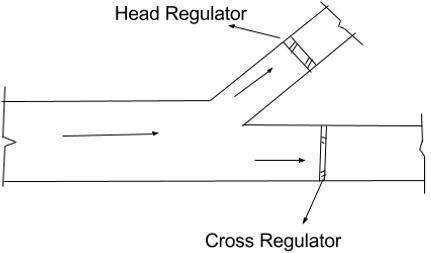 Answer: b
Explanation: This represents that, whenever the parent channel has to be carried straight then the edge of the canal should be considered in deciding the angle of the off take channel.

9. How many numbers of conditions of flow are to be followed while designing the cross regulator and head regulator?
a) 2
b) 3
c) 4
d) 1
View Answer

Answer: a
Explanation: The conditions are considered for the worst conditions of the flow. The flow of the canal should be taken as it is when there is full supply of discharge down the channel with all gates of both head and cross regulators fully open. The discharge in the main channel is low but in the off take channel is running full, the FSL is maintained by partial opening of the gates of cross regulator.

10. By what structures the regulator can control the supplies entering the off take channel?
a) Sluice Gates
b) Falls
c) Piers and Planks
d) Dams
View Answer

Answer: c
Explanation: The regulator consists of essential parts like piers which are placed across the canal at regular intervals with grooves, in which either planks or gates can be used to control the supplies entering off take channel.

To practice all areas of Irrigation Engineering, here is complete set of 1000+ Multiple Choice Questions and Answers.