Answer: d
Explanation: The format of an IP address is a 32-bit numeric address written as four numbers separated by periods. Each number can be zero to 255. For example, 1.160.10.240 could be an IP address.
advertisement

Answer: b
Explanation: Because of the growth of the Internet and the depletion of available IPV4 address, a new version of IP(IPV6), using 128 nits for the IP address, was developed in 1995, and standardized as RFC 2460 in 1998. IPV6 deployment has been ongoing since the mid 2000s.

Answer: a
Explanation: The IP address space is managed globally by the Internet Assigned Numbers Authority(IANA), and by five Regional Internet Registries(RIR) responsible in their designated territories for assignment to end users and local Internet registries, such as Internet services providers.

Answer: c
Explanation: The IP address space is managed globally by the Internet Assigned Numbers Authority(IANA), and by five Regional Internet Registries(RIR) responsible in their designated territories for assignment to end users and local Internet registries, such as Internet services providers.

5. Geolocation software is used by host.
a) True
b) False
View Answer

Answer: a
Explanation: The header of each IP packet contains the IP address of the sending host, and that of the destination host. A host may use geolocation software to deduce the geolocation of it communication peer.
advertisement

Answer: b
Explanation: The class system of the address space was replaced with Classless Inter – Domain Routing in 1993. CIDR is based on variable length Subnet Masking to allow allocation and routing based on arbitrary length prefixes.

8. Many desktops and operating systems include which protocol?
a) IPv6 protocol
b) IPv4 protocol
c) Both IPv6 and IPv4 protocol
d) IPv3 protocol
View Answer

Answer: a
Explanation: All modern desktop and enterprise server operating systems include native support for the IPv6 protocol, but it is not yet widely deployed in other devices, such as residential networking routers, voice over IP(VoIP) and multimedia equipment, and network peripherals.

9. The design of the Internet protocol suites adhere to the ________ principle.
a) Data corruption
b) Connection oriented
c) End to End principle
d) Reliability
View Answer

Answer: d
Explanation: The Transmission Control Protocol is an example of a protocol that adjusts its segment size to be smaller than the MTU.
advertisement

To practice all areas of IOT, here is complete set of 1000+ Multiple Choice Questions and Answers. 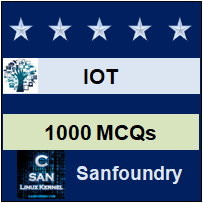