Answer: a
Explanation: The flash file created in flash authoring environment, it is saved with .fla extension. If we want to use this file on a web page it has to be saved in a different format known as SWF. Its extension is .swf
advertisement

2. For exporting movie into SWF format which element is used?
a) <object>
b) <video>
c) <datalist>
d) <dd>
View Answer

Answer: a
Explanation: We use <object> and <embed> elements for exporting movie into SWF format. A code is created by flash that can be used to embed Flash movie into the page. Traditionally these elements were used but now JavaScript has taken their place.

Answer: b
Explanation: For viewing Flash the browser needs to use a plugin. A plugin is an extra piece of software that can be run in a browser. Here the plugin which is used is Flash Player. It is very common that 98% of the browsers have already Flash plugin installed inside.

4. Which one of the following does not support flash?
a) iPhone
b) android
c) windows
d) linux
View Answer

Answer: a
Explanation: Apple launched the iPhone in 2007 and launched an iPad in 2010, they decided not to support Flash. Flash content has been criticized because Flash content is not always accessible. In 2008 <video> and <audio> tags are supported by the browsers in HTML5.

5. Which one of the following is used for adding Flash in the web page?
a) CSS
b) jQuery
c) PHP
d) JavaScript
View Answer

Answer: d
Explanation: One of the most popular for adding Flash to the web page is using JavaScript. There is no need to understand this language in depth because there are many scripts already available that are available to do this.
advertisement

6. Which one of the following is not used inside the <script> tag in Flash videos?
a) replace
b) location
c) version
d) id
View Answer

7. Which one of the following is not the online video format available?
a) Ogg Theora
b) VHS
c) WebM
d) H264
View Answer

Answer: b
Explanation: Online there are movies available in many formats like Ogg Theora, WebM, QuickTime, AVI, Flash Video, MPEG, Windows Media etc. There are also some of the offline formats like DVD, VHS, BlueRay etc.

9. Which one of the following site will provide FLV player?
a) www.longtailvideo.com
b) www.fotolia.com
c) www.sxc.com
d) www.pixlr.com
View Answer

Answer: a
Explanation: We need a player written in Flash for playing FLV files. The main purpose of it is to hold FLV movie and add controls like pause/play. There are two sites that offer FLV players www.longtailvideo.com and www.osflv.com

11. Which attribute allows to show an image while downloading a video?
a) controls
b) poster
c) preload
d) none
View Answer

Answer: b
Explanation: The poster attribute allows us to specify an image to show at the time of downloading of video or until the user tells the video to play. Controls attributes indicate that browser should supply its own controls for playback the video.

Answer: a
Explanation: In multiple video sources we use codec which is used to encode the video. It is supplied within type attribute.

13. What can’t be the value of a quality attribute?
a) autolow
b) low
c) high
d) automedium
View Answer

Answer: d
Explanation: The quality parameter can have values including “low”, “medium”, “best”, “high”, “autohigh”, “autolow”. When it is set to “low” videopalyer will favor playback speed of video clip and anti aliasing will not be used.

Answer: c
Explanation: .OGG format is the best for the use in Firefox. We can use VLC to convert the video into this format. .FLV and .SWF is not supported by all the browsers. .MP4 is supported by Safari and Chrome at its best.
advertisement

Answer: a
Explanation: The full-screen is not supported by Chrome and Safari. In Firefox 3.6 we can view the full screen by the right-click. Rest of the browsers do support the full-screen property of the video.

To practice all areas of HTML, here is complete set of 1000+ Multiple Choice Questions and Answers. 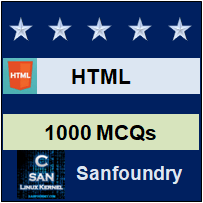