This set of Highway Engineering MCQs focuses on “Stone aggregates – 2”.

1. Aggregates obtained from which type of rocks are strong?
a) Igneous
b) Sedimentary
c) Metamorphic
d) Rocks formed by weathering
View Answer

Answer: d
Explanation: The maximum size of aggregate that can be used in plain concrete is 80mm with ease of workability, however they exceed in some special cases up to 100 mm, mostly 20 mm aggregate is used in RCC and 40 mm in pavements.

Answer: c
Explanation: The maximum size of aggregates used in RCC is limited to 20mm, for ease of compaction and workability, however 10 mm, 15 mm are also used, in some exceptions 25 mm also is used.
Note: Join free Sanfoundry classes at Telegram or Youtube
advertisement
advertisement

5. The factors which effect the formation of metamorphic rocks are?
a) Heat
b) Pressure
c) Heat and pressure
d) Molten lava
View Answer

Answer: c
Explanation: Metamorphic rocks are obtained both from sedimentary and igneous rocks, which are influenced by factors like heat and pressure.
Take Highway Engineering Practice Tests - Chapterwise!
Start the Test Now: Chapter 1, 2, 3, 4, 5, 6, 7, 8, 9, 10

Answer: b
Explanation: If the sieve size of aggregates less than 4.75mm, then it is called as fine aggregate. If it exceeds 4.75 mm it is gravel, if it is less than 75 microns it is a fine grain soil.

Answer: a
Explanation: The aggregates which gives more ease of working and workability is round aggregate, flaky and angular also used in some cases, irregular also are used in pavements.
advertisement

9. The dividing and operating of aggregates into different sizes is called __________
a) Sieve analysis
b) Gap grading
c) Impact
d) Hardness
View Answer

Answer: a
Explanation: The operating and division of the aggregates as per size is called as sieve analysis, in which the particles are divided as per size, gap grading is a part of the graph drawn in sieve analysis.
advertisement

10. The expansion of aggregate on reaction with water is called __________
a) Swelling
b) Bulking
c) Expelling
d) Breaking
View Answer

Answer: b
Explanation: If the aggregate reacts with water and its volume increase then it is called as bulking, swelling is absorption of water, expelling is the removal of water, and breaking is a complete failure.

Answer: b
Explanation: The skid resistance of the pavement is measured in British pendulum number, which is obtained just by rubbing the material with equipment.

12. Which material can be replaced in concrete for a strong pervious concrete pavement?
a) Water
b) Course aggregate
c) Fine aggregate
d) Cement
View Answer

Answer: b
Explanation: Apart from replacement, there are many materials that can be used for substitution, for a strong pervious concrete pavement better option is to replace coarse aggregate.

Answer: c
Explanation: The minimum grade of concrete required for pavement is M40 as it has to resist both wheel loads and weathering action, M30 for low volume roads, M45 may be more helpful.

14. The aggregates which do not have sufficient strength like waste bricks can be used in __________
a) Base
b) Shoulder
c) Surface
d) Footpath
View Answer

Answer: d
Explanation: The aggregates which don’t have sufficient strength can be used in footpath as it is not so important component, surface and shoulder use gravel, base mostly requires high strength soil.

To practice MCQs on all areas of Highway Engineering, here is complete set of 1000+ Multiple Choice Questions and Answers. 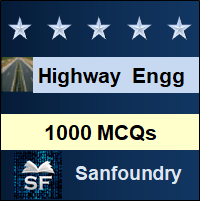