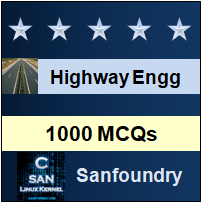 This set of Highway Engineering Questions and Answers for Freshers focuses on ” Engineering Surveys for Highway Alignment”.

1. The surveys of highway alignment are completed in how many stages?
a) One
b) Two
c) Three
d) Four
View Answer

2. The maps in India related to topography are prepared by __________
a) Geological survey of India
b) Survey of India
c) NHAI
d) GOI
View Answer

Answer: b
Explanation: All the maps related to topography in India are prepared by survey of India, NHAI is for highway alignment and geological survey of India for any rocks exploration, government of India is the finance aid for all.

3. The survey in which details are covered roughly but not accurately is called __________
a) Reconnaissance
b) Rough survey
c) Map study
d) Detailed study
View Answer

Answer: a
Explanation: The reconnaissance survey consists of studying the details in the field roughly which are not covered in the map study.

4. The soil survey is conducted in which of the following survey?
a) Preliminary survey
b) Reconnaissance survey
c) Map study
d) Topography study
View Answer

Answer: a
Explanation: The preliminary survey consists of collecting topographical data, soil survey and other data, in reconnaissance survey rough survey is done, map study is for a plan.

Answer: b
Explanation: A traverse is a closed loop used for survey purpose, if it is open then it is called as open traverse.
advertisement

Answer: a
Explanation: In the rolling terrain the interval is considered as 50m and in hilly terrain is taken as 30m.

Answer: a
Explanation: The first step in preliminary survey is to establish primary traverse followed by a survey and detailed project report.

Answer: a
Explanation: The HFL is the height till which water raised during recent floods, to avoid the flooding of roads they are always kept above HFL.

Answer: a
Explanation: The key map shows the proposed site and important places, the key map should not exceed 22*20cm in size.
advertisement

To practice all areas of Highway Engineering for Freshers, here is complete set of 1000+ Multiple Choice Questions and Answers.