3. The region which is transferred from bacterium to the nucleus of the plant cell is called as T-DNA.
a) True
b) False
View Answer

Answer: a
Explanation: T-DNA (Transferred DNA) is the region which is to be transported from the bacterium to the nucleus of the vascular plant and thus it is very important.
advertisement
advertisement

Answer: c
Explanation: Transfer of TDNA depends on a set of genes known as vir if present on tumour inducing plasmids and chv if they are present on chromosome.

6. Which of the plant growth regulators are produced by TDNA?
a) Salicyclic acid
b) Cytokinin
c) Cytokinin and Auxin
d) Jasmonic Acid
View Answer

7. If a small intermediate vector system is used along with a selectable marker, then it is called as __________
a) fusion plasmids
b) hybrid plasmids
c) co-integrative plasmids
d) complex plasmids
View Answer

Answer: c
Explanation: Tumour inducing plasmids are very large in size and thus they can be manipulated easily. In order to overcome this, small integrating plasmids with a selectable marker are used and it is known as co-integrative plasmid. They are then further inserted into the bacterium.
advertisement

8. Binary vector systems can also be used for transferring the DNA via agrobacterium.
a) True
b) False
View Answer

Answer: a
Explanation: As, we know Ti plasmid is difficult to manipulate because eof larger size, other alternatives are used. Binary vector system contains the gene of interest flanked by border repeats. Border repeats are the sequences present in the Ti plasmid originally. With the help of it, transfer is done into the plants.

9. If transfer of DNA from Agrobacterium to plants is done via incubation of explanted material and the vector containing DNA of interest and then selection is done via selectable marker then this method is called as _________
a) transformation
b) co-cultivation
c) co-transformation
d) floral dipping
View Answer

Answer: b
Explanation: Co-cultivation is the method of incubation of explanted material and the vector containing DNA of interest. Further selection is done via selectable marker such as antibiotic resistance. Floral dipping is an approach used for plant Arabidopsis.
advertisement

10. If gene of interest is inserted into protoplasts but the transformation is not stable, then it is called as __________ expression systems.
a) permanent
b) temporary
c) transient
d) unstable
View Answer

Answer: c
Explanation: If the gene of interest is inserted into protoplasts but the transformation is not stable, then it is called as transient expression systems.

Answer: b
Explanation: 35S promoter is obtained from cauliflower mosaic virus (CaMV). It is responsible for the generation of 35S transcript in infected cells.

13. What is the function of glyphosate?
a) It is a fungicide
b) It is an herbicide
c) It is an enzyme used in place of glucose as a carbon source
d) It is used for adding phosphate groups
View Answer

Answer: b
Explanation: Glyphosate is an herbicide. It inhibits an enzyme which is necessary for shikmic acid pathway.

14. Baciullus thuringiensis is used for the production of toxins which can be used as _________
a) insecticides
b) pesticides
c) germicides
d) fungicides
View Answer

Answer: a
Explanation: Bacillus thuringiensis is used for the production of toxins which and proteinaceous in nature and are produced during sporulation. These toxins are insecticidal in nature.

15. Which of the following compounds control ripening in tomatoes?
a) Auxin
b) Cytokinin
c) Ethylene
d) Jasmonic acid
View Answer

Answer: c
Explanation: Ripening of tomatoes is controlled by ethylene. It is a plant hormone. Other plant hormones such as auxin and cytokinin are growth hormones.

To practice all areas of Genetic Engineering, here is complete set of 1000+ Multiple Choice Questions and Answers. 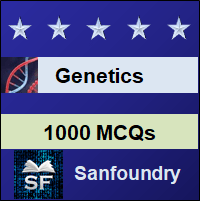