This set of Gene Manipulation Questions and Answers for Freshers focuses on “Basic Laboratory Techniques – 2”.

1. The technique of sucrose gradients was later superseded by __________
a) Electroporation
b) Electrodialysis
c) Gel electrophoresis
d) Biolistics
View Answer

Answer: c
Explanation: The first experiments of cutting and joining DNA were monitored by velocity sedimentation in sucrose gradient; this has been entirely superseded by gel electrophoresis.
advertisement

2. Gel electrophoresis is not used as a purification technique.
a) True
b) False
View Answer

Answer: b
Explanation: Gel electrophoresis is not only used as an analytical method, but it is also routinely used preparatively for the purification of DNA.

Answer: b
Explanation: An agarose gel is a complex network of polymeric molecules whose average pore size depends on the buffer composition.

Answer: c
Explanation: DNA molecules display elastic behavior by stretching in the direction of the applied field and then contracting into dense balls.
advertisement

Answer: d
Explanation: With molecules about 20 kb in size, it is difficult to separate molecules without recourse to pulsed electric fields.

Answer: b
Explanation: In pulsed-field gel electrophoresis (PFGE), developed by Schwartz and Cantor 1984, molecules as large as 10 Mb can be separated in agarose gels.
advertisement

8. In PFGE, the direction of DNA molecules is periodically ________
a) Hindered
b) Changed
c) Paused
d) Slowed
View Answer

Answer: b
Explanation: The DNA is caused to periodically alter its direction of migration by regular changes in the orientation of electric field with respect to the gel.

Answer: a
Explanation: The difference between the directions of migration induced by each of the electric fields is the reorientation angle and corresponds to the angle that the DNA must turn as it changes its direction of migration each time the fields are switched.
advertisement

Answer: a
Explanation: The reorientation angle corresponds to the angle that the DNA must turn as it changes its direction of migration each time the fields are switched.

11. Samples do not run in straight lines is a ________ of PFGE.
a) Advantage
b) Disadvantage
c) Cost efficiency
d) Ease
View Answer

Answer: b
Explanation: A major disadvantage of PFGE is that the samples do not run in straight lines, which makes the subsequent analysis of samples difficult.

Answer: a
Explanation: The reorientation angle can be varied in newer CHEF systems and it has been found that for whole yeast chromosomes the migration rate is fastest at 106⁰.

Answer: b
Explanation: DNA as large as 200-300 kb are routinely handled in genomics work and these can be separated in a matter of hours using CHEF.

Answer: b
Explanation: DNA as large as 200-300 kb are routinely handled in genomics work and these can be separated in a matter of hours using CHEF.

To practice all areas of Gene Manipulation for Freshers, here is complete set of 1000+ Multiple Choice Questions and Answers. 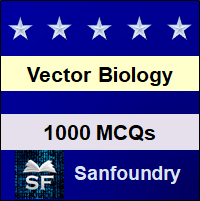