This set of Foundry Multiple Choice Questions & Answers (MCQs) focuses on “Patterns and its Functions”.

Answer: a
Explanation: A Patten is a casting double which has allowances, provision of the core prints which is used to make a casting. It is a replica into which molten metal will be poured during the casting processes and later the metal is hardened and a component is obtained.

3. The contractions in the materials depend upon the metallurgical transformation taking place during which of the following process?
a) Solidification
b) Melting
c) Calcination
d) Smelting
View Answer

Answer: a
Explanation: When a metal undergoes solidification, it undergoes a decrease in volume which is called contraction and hence is it is a major parameter in the metallurgical transformation which is taken into consideration while designing any component for foundry applications.
Subscribe Now: Foundry and Forging Newsletter | Important Subjects Newsletters

4. The shrinkage value given to the pattern must be _________ for the outer dimensions which are to be restrained.
a) Lower
b) Higher
c) Equal
d) Does not alter anything
View Answer

Answer: b
Explanation: In a dry sand core, the centre of the casting may restrain the casting from the contraction but the edges are not restrained. Thus, it is desirable to provide a higher shrinkage allowance.

Answer: a
Explanation: At the time of withdrawing a pattern from the sand mould, the vertical faces of the pattern are in continual contract with sand which damages the mould cavity. Hence the pattern is tapered from the parting line and it is called as the draft allowance.
Check this: Metallurgical Engineering Books | Metallurgical Engineering MCQs

Answer: b
Explanation: The dowel pins match with the precisely made holes in the drag half of the pattern and thus align the two halves (cope and drag). The dowel pins are used as location guides for the adjustments of the cope and the drag.
advertisement

8. _________ is used for the pattern in the full mould process.
a) Polythene
b) Polysilicate foam
c) Polyurethane foam
d) Polystyrene foam
View Answer

Answer: d
Explanation: In the full moulding process, the foam evaporates soon after the metal is poured. Hence Polystyrene foam is used as it is light and can easily be formed into any shape required. It can be used as light duty work for small castings.

Answer: c
Explanation: Gated Pattern is an improvement over simple pattern where gating and runner system is integral with a pattern. A Gated Pattern consists if the moulding and control patterns, jigs, the drying plates and the stripping place all embedded in it.
advertisement

Answer: a
Explanation: Mould forming is a one by which the design of the casting which is to be produced is formed. The Pattern is one of the most important parts of the process by which the mould is formed. Hence the foundry men popularly call it as a mould forming tool. 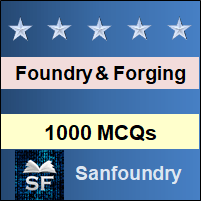