1. The term plastic is derived from the term ______
a) Plasticos
b) Plastikos
c) Plastiquo
d) Plastein
View Answer

Answer: c
Explanation: The first folding carton was commercially used in 1897, by NABISCO (National Biscuit Company). They used it for packaging their product Uneeda Biscuit.

3. What does the term plastikos mean?
a) Easily shaped or deformed
b) Stretchable
c) Bendable
d) Malleable
View Answer

4. Which of the following is the first synthetic plastic?
a) PVC
b) PP
c) Bakelite
d) Nylon
View Answer

Answer: c
Explanation: In 1907, Leo Baekeland, a Belgian chemist, invented Bakelite. Bakelite, also known as polyoxybenzylmethylenglycolanhydride, is the first synthetic polymer made from phenol and formaldehyde.

Answer: b
Explanation: Retort pouch was first developed in 1950s. A retort pouch is a packaging material, composed of different layers – Polypropylene (food contact layer), Nylon (Abrasion Resistance layer), Aluminium foil (Barrier Layer) and Polyester (outside layer). In 1950s, the retort pouch for heat-processed foods was developed originally for the US military, to pack Ready to Eat food items.

6. Which of the following is the first man-made plastic?
a) Parkesine
b) Nylon
c) Teflon
d) Polyvinyl Chloride
View Answer

Answer: a
Explanation: Parkesine, also known as nitrocellulose is the first man made plastic. It was made majorly from cellulose, treated with nitric acid as a solvent. It was made by Alexander Parkes in 1856.

Answer: c
Explanation: Nicholas Appert is known as the “father of canning”. He was a confectioner. In 1809, in France, Nicolas Appert produced the means of thermally preserving food in hermetically sealed glass jars.

Answer: b
Explanation: The first commercial paperboard was produced in 1817, by the firm M. Treverton and Son. Paperboard is a packaging material, thicker than paper possessing characteristics like foldability and rigidity. Paper with grammage greater than 250 g/m2 is called paperboard.

9. Which of the following was used by Peter Durand?
a) Cellophane
b) Tin Cans
c) Corrugated Fiberboard
d) Glass jar
View Answer

Answer: b
Explanation: In 1810, Peter Durand designed the soldered tinplate canister and commercialised the use of heat preserved food containers.

Answer: d
Explanation: The first folding box was used by Quaker Oats in 1884. Quaker oats is a company that mainly produces oatmeal and cereal products. In 1884, folding boxes were used to package rolled white oats.

Answer: d
Explanation: Cellophane was first invented by Jacques E. Brandenberger, a Swiss textile engineer in 1908. It is a transparent film which is thin and quite stiff. It is a polymeric film made from regenerated cellulose.

Answer: d
Explanation: Nylon, a synthetic polymer, was produced in 1935. Nylon was developed by a research team at DuPont, headed by an American chemist, Wallace H. Carothers. It was made by the chemical synthesis of adipic acid and hexamethylrnrdiamine mainly, by condensation polymerisation.

Answer: a
Explanation: In 1959, also called “pull-tab”. Invented by Ermal Fraze. This eliminated the need for a separate opener tool by attaching an aluminium pull ring lever with a rivet to a scored wedge shaped tab section of can top.

Answer: c
Explanation: Edible packaging, also called Food wrapped in food, was introduced in 2012. WikiFoods in 2012 along with Stonyfield introduced this novelty to market.

To practice all areas of Food Packaging Technology, here is complete set of 1000+ Multiple Choice Questions and Answers. 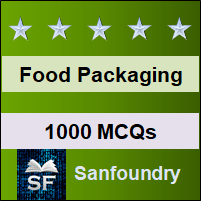