1. Which of the following sensor penetrates into the fermenter?
a) Exhaust-gas analyzers
b) pH electrodes
c) Tachometers
d) Load cells
View Answer

2. Which of the following sensor is used to measure the acid/alkali addition?
a) pH
b) Redox
c) Temperature
d) Oxygen
View Answer

3. Which of the following sensor is used to measure the change in flow rate?
a) Temperature
b) Weight
c) Medium analysis
d) Exit-gas analysis
View Answer

4. The heat control at large-scale in the fermenter is carried out by _________
a) Inter heating coils
b) Heating jacket
c) Controlled bath
d) Cold-water circulation
View Answer

Answer: c
Explanation: There is no such magnetic type used for the measurement of temperature in the fermentation. The non-electrical type, electric type, radiation types are usually used to measure temperature in fermenters.
Check this: Biotechnology MCQs | Chemical Engineering Books

7. Which of the following is made up of mixtures of pure oxides of iron and nickel?
a) Thermistors
b) Mercury thermometers
c) Radiation thermometers
d) Metallic thermometers
View Answer

8. Which of the following devices is not used for pressure measurement?
a) Diaphragm gauge
b) Pressure bellows
c) Strain gauge
d) Dynamometer
View Answer

Answer: d
Explanation: The devices used for the measurement of pressure is diaphragm gauge, strain gauge, pressure bellows, piezoelectric transducer, etc. The dynamometer is useful in agitation measurement and control.

Answer: a
Explanation: Eugene Bourdon in 1949 invented the Bourdon tube. It has been used in pressure measurement in many processes like fermentation. It is used as a direct indicating gauge.
advertisement

10. Which of the following measures the pressure with change in electrical resistance?
a) Bourdon tube
b) Pressure bellows
c) Strain gauge
d) Diaphragm gauge
View Answer

11. Which of the following sensor is not a part of the fermenter?
a) On-line
b) In-line
c) Off-line
d) Out-line
View Answer

12. Which of the following parameters is not useful in the construction of pressure bellows?
a) Hysteresis
b) Sensitive to changing pressures
c) Corrosion
d) pH
View Answer

Answer: d
Explanation: The parameters which are kept in mind while constructing pressure bellows are Hysteresis, sensitive to changing pressures, corrosion, range of pressure, fabrication ease, fatigue on the dynamic operation.

13. Ion-specific sensors are the types of on-line sensors.
a) True
b) False
View Answer

Answer: a
Explanation: The ion-specific sensors are the type of on-line sensors and are an integral part of the fermenter. The measured value is entered into the control system for controlling the process.

14. Antifoam probe is a type of off-line sensor.
a) True
b) False
View Answer

Answer: b
Explanation: The antifoam probe is a type of in-line sensors. They are an integral part of the fermenter. It is used to check the foam formation in the fermenter and control it.

Answer: c
Explanation: The bimetallic thermometer consists of a bimetallic strip which has a different temperature coefficient. It is used to convert temperature into mechanical displacement.

To practice all areas of Fermentation Technology, here is complete set of 1000+ Multiple Choice Questions and Answers. 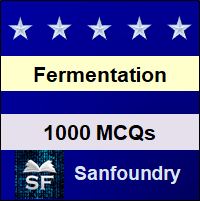