Answer: c
Explanation: Governor is a mechanical device which controls the speed of the engine by supplying fuel on varying load condition. When there is less load on engine speed of rotation of spindle increases and more centrifugal force acts on flyballs throwing them outwards thus sleeve moves upward and fuel supply is decreased.

5. Which governor does not achieve ISOCHRONOUS behaviour?
a) Hartnell
b) Spring Controlled
c) Porter and Proell
d) Watt
View Answer

Answer: c
Explanation: In Porter and Proell governor, we never achieve ISOCHRONOUS behaviour because we can’t neglect friction between sleeve and spindle.

Answer: a
Explanation: While considering performance of engine during sensitiveness analysis of governor, requirement is to keep speed fluctuation as small as possible and governor which does this is called sensitive governor.

7. A Proell governor has equal arms of length 300 mm. The upper and lower ends of the arms are pivoted on the axis of the governor. The extension arms of the lower links are each 80 mm long and parallel to the axis when the radii of rotation of the balls are 150 mm and 200 mm. The mass of each ball is 10 kg and the mass of the central load is 100 kg. Determine the range of speed of the governor.
a) 20 rpm
b) 30 rpm
c) 10 rpm
d) 25 rpm
View Answer 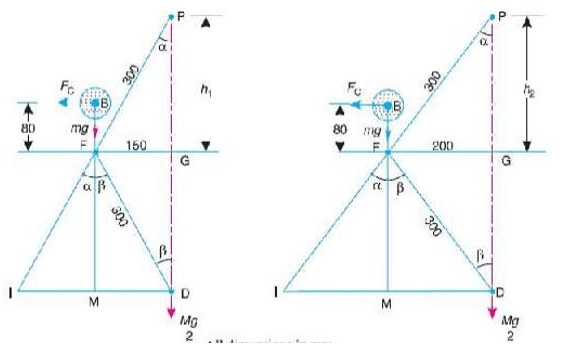 Answer: b
Explanation: Building on Watt’s design was American engineer Willard Gibbs who in 1872 theoretically analysed Watt’s conical pendulum governor from a mathematical energy balance perspective. During his Graduate school years at Yale University, Gibbs observed that the operation of the device in practice was beset with the disadvantages of sluggishness and a tendency to over-correct for the changes in speed it was supposed to control.

To practice all areas of Farm Machinery, here is complete set of 1000+ Multiple Choice Questions and Answers. 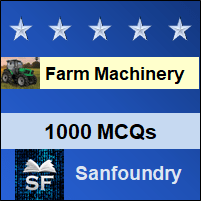