1. It would be useful if enzyme catalyzed reactions where performed in organic solvents, other than water.
a) True
b) False
View Answer

Answer: a
Explanation: It would be useful if enzyme catalyzed reactions where performed in organic solvents, other than water because of the following reasons:
• Water is not the ideal medium for the majority of organic reactions.
• Many reactants such as molecular oxygen, steroids and lipids are more soluble in organic solvents than in water.
• For accomplishing reactions with reactants quite labile in an aqueous environment, non-aqueous media may be used which allows a much increased volumetric activity to be achieved.
• Microbial contamination is a lesser of a problem in organic solvents. As a result of this, microbial proteases are absent which leads to an apparent stabilization in the biocatalyst.

2. Under normal physiological conditions, which of the following enzymes catalyze the degradation of polymers?
a) Transferases
b) Isomerases
c) Hydrolases
d) Ligases
View Answer

Answer: c
Explanation: Under normal physiological conditions, hydrolases are the enzymes catalyze the degradation of polymers. Hydrolases which are the hydrolytic enzymes are transferases that transfer a moiety to the acceptor, water. The normal concentration of water is much greater than its typical Km and the rate of hydrolysis will not be affected as the reaction proceeds.

3. ___________ are used to immobilize the enzyme to the aqueous phase allowing its separation from product-containing organic phase.
a) Centrifuge
b) Chromatography
c) Phase separators
d) Ultrasonicator
View Answer

Answer: c
Explanation: Restriction of the enzyme to the aqueous phase effectively immobilizes the enzyme and allows its straightforward separation from product-containing organic phase by use of phase separators. Centrifuge is used for centrifugation which separates on the basis of the particle size and density difference between the liquid and solid phases. Chromatography is used for separation of a mixture by dissolving the mixture in a fluid called the mobile phase, which carries it through a structure holding another material called the stationary phase. Ultrasonicator is utilized to break up, disperse and sheer target material samples through its focused ultrasonic frequencies.

4. What does the following diagram represent? 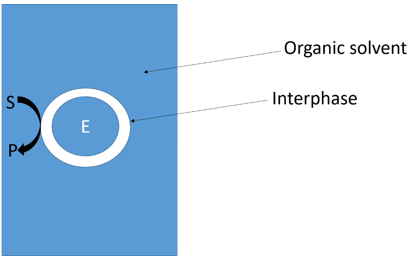 Answer: a
Explanation: The diagram shows schematic representation of anhydrous enzyme suspended in the organic solvent. Using enzymes with organic solvent, results in a two phase system as enzymes possess a significant amount of strongly bound water. In the diagram, it is shown that the enzyme is surrounded by thin interphase consisting of water or water plus immobilization support.

5. What is represented in the following diagram? 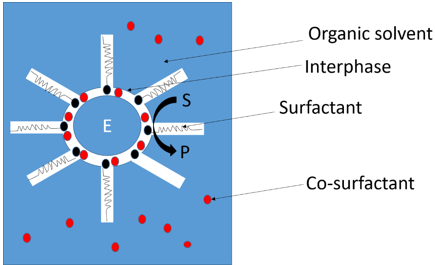 Answer: b
Explanation: In the diagram above, a schematic representation of an enzyme dissolved in a reversed micellar medium is shown. Micelles are formed by the surfactant molecules with help from co-surfactant. CTAB, AOT, phosphatidylcholine, etc., are the surfactants used which is only found at the interphase boundary. Whereas, the co-surfactant like butanol, hexanol and octanol are added to vary the properties of interphase which is less polar and more soluble in the organic continuous phase.

6. Pick the odd one out.
a) Molecular oxygen
b) Steroids
c) Oestrogens
d) Lipids
View Answer

Answer: c
Explanation: Enzyme catalyzed reactions could be performed in organic solvents other than water, as it is not the ideal medium for the majority of organic reactions. Reactants such as molecular oxygen, steroids, lipids, etc., are more soluble in organic solvents than in water. Some products such as oestrogen may be labile in an aqueous environment. To overcome this, non-aqueous media which allows a much increased volumetric activity to be achieved may be used.

Answer: a
Explanation: Polymerization of phenols is catalyzed by peroxidase enzyme which produces a higher molecular weight product to dissolve the products initially formed. Penicillinase is used in the detection of penicillin. Lysozyme acts as antibiotic and helps in bacterial cell wall hydrolysis. Ribonucleases have antiviral activity and helps in RNA hydrolysis.