This set of Enzyme Technology Questions and Answers for Freshers focuses on “Enzyme Kinetics Fundamentals – Effect of pH, Temperature, Pressure, and Ionic Strength on Enzyme Catalysis”.

1. Enzymes are amphoteric molecules.
a) True
b) False
View Answer

Answer: a
Explanation: Enzymes are biological catalysts. Enzymes contain large number acidic and basic groups situated on their surface. They can either act as acid or base depending on the conditions. Hence enzymes are amphoteric in nature.
advertisement

Answer: c
Explanation: Enzymes are amphoteric in nature. As the pH conditions vary, they may behave as acids or bases. But, there is particular pH of an enzyme at which the net charge on the molecule becomes zero. This point is called as isoelectric point. At this point, enzymes will have minimal solubility in aqueous solutions. pKa is defined as the pH at which half of the groups are ionized. Km is the concentration of the substrate at which half of the enzyme are in bound state. The time taken to reduce the activity to half of its original activity is called half-life.

4. The rate of enzyme catalyzed reaction decreases with an increase in ionic strength if the charges are identical.
a) True
b) False
View Answer

5. What does the following graph represent? 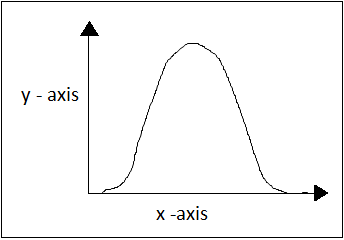 Answer: b
Explanation: The graph shows a bell-shaped curve which is exhibited by pH versus rate of enzyme catalyzed reaction (activity). As pH increases, enzyme activity increases and reaches a maximum point (optimum pH) and then starts reducing on further treatment with pH. The activity is reduced when pH > 8, because of destruction of cysteine residues due to base catalyzed β- elimination reaction. The activity also reduces when pH < 4, because peptide bonds next to aspartic acid are liable to hydrolysis.
Join [email protected]

6. The following graph represents the effect of ____________ on activity of an enzyme catalyzed reaction. 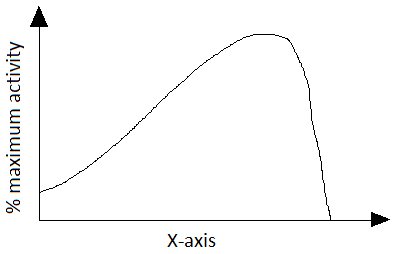 Answer: c
Explanation: The effect of temperature on activity of an enzyme catalyzed is given in the above graph. In an exothermic reaction, the reverse reaction increases more rapidly than forward reaction. Due to this equilibrium is altered and optimum temperature of the reaction is reduced. The reverse holds good for endothermic reaction. It is preferred to use enzymes at high temperatures. But, at temperatures above critical temperature, enzymes may undergo irreversible denaturation resulting in loss of activity. As the incubation time increases, the activity of an enzyme catalyzed reaction reduces at given temperatures. As the incubation time increases, the productivity initially increases and then reaches a stationary at given temperatures.

Answer: a
Explanation: The Arrhenius equation is given by k = \(Ae^{\frac{-∆G}{RT}}\)
Where k = kinetic rate constant, A = Arrhenius constant, ΔG = standard free energy of activation (kJ M-1), R = universal gas constant and T = absolute temperature.
Rate of all the enzyme catalyzed reaction with an increase in temperature is given by the Arrhenius equation. Miachelis Menton equation and Lineweaver Burk equation represents enzyme activity whereas Half-life represents the time at enzyme activity is reduced to half.

Answer: a
Explanation: The enzyme catalyzed reaction which involves dissolved gases is influenced by solubility of gases, difference in molar volumes between reactants and products and volume changes occurring during binding and catalysis. In some reactions, the volume may get reduced to 50 ml/mol due to conformational changes and changes in hydration. This in turn leads to doubling of Kcat and halving of Km. In this way, changes in pressure also affects the enzyme catalyzed reaction.

Answer: c
Explanation: The above equation is representing half-life of an enzyme. Half-life of an enzyme is the time it takes for the activity to reduce to half of the original activity. Half-life is inversely proportional to rate of denaturation. Arrhenius equations describes the rate of an enzyme catalyzed reaction with an increase in temperature. Lineweaver Burk equation describes the rate of an enzyme catalyzed reaction. The relationship between the change in the pKa and the change in temperature is given by the Gibbs-Helmholtz equation.
advertisement

To practice all areas of Enzyme Technology for Freshers, here is complete set of 1000+ Multiple Choice Questions and Answers.