1. Calorimetric biosensors represent the most generally applicable type of biosensor.
a) True
b) False
View Answer

Answer: a
Explanation: Most of the enzyme catalyzed are exothermic reactions which means heat generating reaction. This heat generated is used to measure the rate of the reaction and hence, the analyte concentration. Due to this reason, colorimetric biosensors represent the most generally applicable type of biosensor. Hence the above statement in true.

Answer: c
Explanation: As cholesterol is the reactant for cholesterol oxidase which produces 53 kJ/mol heat output on the reaction completion, esters are catalyzed chymotrypsin which produces 4-16 kJ/mol of heat. Glucose oxidase, catalase and penicillinase act on glucose, hydrogen peroxide and penicillin G to produce heat which may be measured by calorimetric biosensor.

Answer: a
Explanation: Trypsin is an enzyme that catalyzes reactions involving peptides releasing 10-30 kJ/mol of heat. In the same way, Amylase is an enzyme which catalyzes starch and heat output produced is 8 kJ/mol. Sucrose, urea and uric acid are catalyzed by invertase, urease and uricase. The reactions involving invertase, urease and uricase produces 20kJ/mol, 61kJ/mol and 49kJ/mol amount heat is produced respectively.

6. Which biosensor is represented in the following diagram? 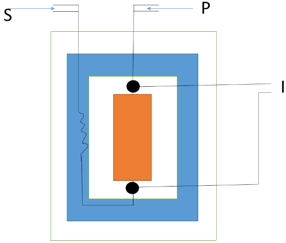 Answer: c
Explanation: The diagram above represents the schematic diagram of a calorimetric biosensor. In this biosensor, the sample stream passes through the outer insulated box to the heat exchanger within an aluminium block. Later, it flows past the reference thermistor, into the packed bed bioreactor, containing the biocatalyst, where the reaction occurs. The change in temperature is determined by the thermistor and the solution is passed to waste. External electronics determines the difference in the resistance, and hence temperature, between the thermistors.

7. The relative decrease in the electrical resistance of the thermistor is proportional to the increase in temperature.
a) True
b) False
View Answer

Answer: a
Explanation: The thermistors are used to detect the temperature change. It functions by changing their electrical resistance with the temperature, obeying the following relationship
\(\frac{∆R}{R} = -(\frac{B}{T^2})∆T\)
According to this equation, the relative decrease in the electrical resistance (ΔR/R) of the thermistor is proportional to the increase in temperature (ΔT). A typical proportionality constant (-B/T2) is -4% /˚C. The resistance change is converted to a proportional voltage change before amplification. The expected result is a linear correlation between the response and the enzyme activity. Hence the above statement is true.

8. Which of these is not true for thermistors?
a) Low sensitivity
b) Low range
c) Increasing the heat output
d) generation or absorption hydrogen ions
View Answer

Answer: d
Explanation: The generation or absorption of hydrogen ions is true on case of potentiometric biosensors and not calorimetric biosensors. The following is true for biosensor:
* Low sensitivity (10-4 M) and low range (10-4 – 10-2 M) of thermistor can be used with greater sensitivity with reaction involving exothermicity.
* The low sensitivity of the system can be increased substantially by increasing the heat output by the reaction.

9. For measuring using calorimetric biosensors, the sensitivity of the glucose analysis using glucose oxidase may be doubled by the co-immobilization of _____________
a) penicillinase
b) uricase
c) catalase
d) urease
View Answer

Answer: c
Explanation: In the simplest case of increasing sensitivity, the process can be linked to other several reactions in a reaction pathway which can contribute to the heat output. Thus, the sensitivity of the glucose analysis using glucose oxidase can be more than doubled by the co-immobilization of catalase within the column reactor in order to disproportionate the hydrogen peroxide produced.

10. An extreme case of amplifying sensitivity for the determination of ADP does not involve co-immobilization which of the following enzyme?
a) Hexokinase
b) Lactate dehydrogenase
c) Pyruvate kinase
d) Catalase
View Answer

Answer: d
Explanation: Catalase is co-immobilized with glucose oxidase within the column reactor in order to disproportionate the hydrogen peroxide produced. This doubles the heat output which can then be measured. To measure ADP, four enzymes such as hexokinase, pyruvate kinase, lactate dehydrogenase and lactate oxidase are co-immobilised within the packed bed reactor. In spite of the positive enthalpy of the pyruvate kinase reaction, the overall process results in a 1000-fold increase in sensitivity, primarily due to the recycling between pyruvate and lactate.