Answer: d
Explanation: Amperometric biosensor function by the production of a current when a potential is applied between two electrodes. They generally have response times, dynamic ranges and sensitivities similar to the potentiometric biosensors, which makes use of ion-selective electrodes in order to transduce the biological reaction into an electrical signal. Optical biosensors involve determining changes in light absorption between the reactants and products of a reaction or measuring the light output. Calorimetric biosensor involves measuring the heat generated during a reaction using thermistors.

Answer: c
Explanation: The simplest amperometric biosensor is clark oxygen electrode, which consists of a platinum cathode at which oxygen is reduced and a silver/silver chloride reference electrode. Glass electrodes is an ion-selective electrode which has very thin hydrated glass membrane which generates a transverse electrical potential. Thermistors are used to measure the temperature changes in a calorimetric biosensor. Solid-state electrode is an ion-selective electrode which has thin membrane of a specific ion conductor made from a mixture of silver sulphide and a silver halide.

Answer: c
Explanation: Amperometric biosensor consists of a platinum cathode at which oxygen is reduced and a silver/silver chloride reference electrode. The above reaction occurs at Ag anode releasing 4e– which are then utilized by oxygen at Pt cathode reducing the oxygen concentration to zero. Pt anode and Ag cathode does not exist and hence not used on amperometric biosensor.

Answer: a
Explanation: Pt anode and Ag cathode does not exist. At Pt cathode, reduction occurs of oxygen to water by involving the 4 electrons released at Ag anode. Oxidation occurs at Ag anode and reduction at Pt cathode. These reactions are involved in amperometric type of biosensor.

6. Which of the biosensor is presented in the diagram? 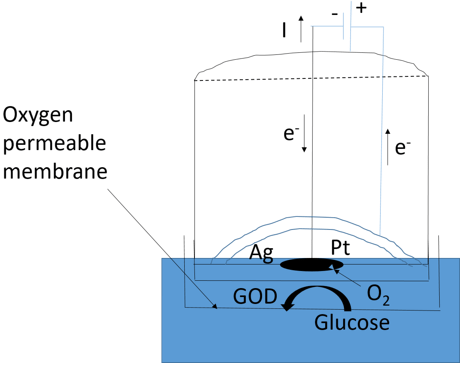 Answer: c
Explanation: In the above diagram, simplest form amperometric biosensor is shown. In amperometric biosensor, an electric potential is applied between the central platinum cathode and the annular silver anode in the presence of saturated solution of KCl which generates a current. This electrode compartment is separated from the Glucose oxidase (biocatalyst) by a thin plastic membrane that is permeable only to oxygen. The analyte solution is separated from the biocatalyst by another membrane which is permeable to the substrate and product.

7. Use of mediators in amperometric biosensor is required.
a) True
b) False
View Answer

Answer: a
Explanation: In amperometric biosensor, there is an efficient reduction of oxygen at the surface of the cathode causes the oxygen concentration there to be effectively zero. But the major problem in this case is their dependence on the dissolved oxygen concentration. To overcome this, mediators may be used which transfers the electrons directly to the electrode bypassing the reduction of the oxygen co-substrate. Hence the above statement is true.

Answer: d
Explanation: The properties which are true for mediators used in amperometric biosensor are as follows:
• Mediators must react rapidly with reduced form of enzyme.
• Mediators must be sufficiently soluble in oxidized and reduced forms.
• The reduced form of the mediator should not readily react with oxygen.
• The over potential for the regeneration of the oxidized mediator should be low and independent of pH.
Increasing the heat output is true for thermistors used in calorimetric biosensor.

9. Which of the following represents a commonly used family of mediators?
a) Pyruvate kinase
b) Hexokinase
c) Ferrocenes
d) Lactate oxidase
View Answer

Answer: c
Explanation: Ferrocenes represent a commonly used family of mediators. An extreme case of this amplification is the detection of ADP. ADP is the added analyte and excess glucose, phosphoenol pyruvate, NADH and oxygen are present to ensure maximum reaction. Four enzymes such as hexokinase, pyruvate kinase, lactate dehydrogenase and lactate oxidase are co-immobilised within the packed bed reactor.

10. Amperometric biosensors for flavo-oxidase enzymes illustrates three generations in the development of a biosensor.
a) True
b) False
View Answer

11. What is represented by the following equation?
I = nFAvA
a) Frequency
b) Current
c) Electrical resistance
d) Electrical potential
View Answer

Answer: b
Explanation: The equation represents current produced by amperometric biosensors is related to the rate of reaction by the expression:
I = nFAvA where,
n = the number of electrons transferred, A = electrode area, vA = rate of reaction, and F = Faraday.