1. Which of the following food is not included in dairy food group?
a) Milk
b) Cheese
c) Meat
d) Cream
View Answer

Answer: c
Explanation: All fluid milk products and all the foods made from milk are considered to be a part of the dairy food group like milk, cheese, cream, curd, but meat is an animal product and is not fluid.

2. Which country is the largest producer of milk in the world?
a) Spain
b) India
c) USA
d) Australia
View Answer

Answer: b
Explanation: India is the largest producer of milk and it contributes around 19% of the world’s total milk production which even crosses over 150 million tons of milk production per year in the entire globe and is also known as the Oyster of the dairy industry globally.

3. Which of the following primary process is not followed after the delivery of the raw milk?
a) Pasteurization
b) Cleaning
c) Separation
d) Packaging
View Answer

Answer: d
Explanation: After the delivery of the raw milk in the industry, the first 3 steps are followed irrespective of production type i.e. Cleaning using separators, Separation into skimmed milk and cream and initially pasteurization, but packaging is done in the final stage.

4. Skimmed milk can be processed into drinking milk by addition of cream and _____________
a) Algal cultures
b) Pathogens
c) Bacterial cultures
d) Fungi
View Answer

Answer: c
Explanation: Skimmed milk can be processed into drinking milk or fresh milk by addition of cream partly and Bacterial cultures which would serve as inoculum, Algae or Fungi cannot be used which might destroy the quality of milk, pathogens are harmful if consumed.

5. Which of the following products is not made from the basic materials like whey and skimmed milk?
a) Dried milk
b) Casein
c) Lactose
d) Lactic acid
View Answer

Answer: d
Explanation: Dried milk, Casein, Lactose is formed from basic materials like whey and skimmed milk which can undergo processing conditions to form these products which are highly essential for body, but lactic acid is made by muscle tissue and RBCs of our body.

6. Which of the following waste is not produced in the dairy industry?
a) Whey
b) Dairy sludge
c) Wastewater
d) Fresh water
View Answer

7. Casein is a slow digesting dairy protein.
a) True
b) False
View Answer

Answer: a
Explanation: Casein is a slow digesting dairy protein which releases amino acids slowly and help with recovery and reduce muscle breakdown while they sleep.

8. What of the following activities lead to high salinity during cheese production?
a) Cleaning
b) Pasteurization
c) Homogenization
d) Salting
View Answer

Answer: d
Explanation: High amounts of salinity is observed during the cheese production process due to salting processes and this might lead to increased levels of saline conditions, Homogenization is the process of making the fat globules uniformly distributed, Cleaning and Pasteurization processes are followed during the initial step of processing of the raw milk.

9. Which of the following steps is not followed during the treatment of wastewater?
a) Floatation and fat separation
b) Mixing
c) Activated sludge system
d) Pasteurization
View Answer

Answer: d
Explanation: Pasteurization is followed during the initial treatment of waste water from dairy industry for decreasing the microbial load in the milk by exposing the it to higher temperatures, Floatation and fat separation is the first step which is followed by Mixing where carbon dioxide is removed and Activated sludge system leads to BOD reduction.

Answer: a
Explanation: Aerobic treatment method requires a lot of energy during the treatment method for the supply of oxygen which is continuously required during treatment and hence, it is an energy consuming process.

To practice all areas of Environmental Biotechnology, here is complete set of 1000+ Multiple Choice Questions and Answers. 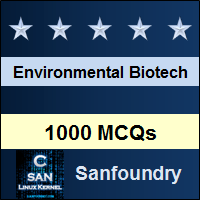