This set of Engineering Metrology test focuses on “Optical Instruments for Angular Measurement”.

1. Which of the following is not true for autocollimators?
a) Has an infinity telescope
b) Has an autocollimator
c) For smaller angle it is not accurate
d) Very high sensitivity
View Answer

Answer: b
Explanation: Linear displacement of the graticule image is directly proportional to tilt of the reflector. It can be measured by an eyepiece graticule, electronic detector system or optical micrometer, scaled directly in angular units.

Answer: c
Explanation: It is possible to measure length to accuracy of 1 part in 106 with laser interferometer. With two retro-reflectors that are placed at a fixed distance, and a length measuring laser interferometer the angle change can be measured to an accuracy of 0.1 second.
Sanfoundry Certification Contest of the Month is Live. 100+ Subjects. Participate Now!
advertisement
advertisement

4. Which of the following option is correct for the given statements about optical instruments for angular measurements?
Statement 1: Laser interferometer with two-retro reflector uses sine principle.
Statement 2: Photoelectric microptic autocollimator can be used as a visual collimator.
a) F, F
b) T, F
c) F, T
d) T, T
View Answer

Answer: d
Explanation: Laser interferometer uses the Sine principle. The line which joins the poles of the reflectors makes the hypotenuse of the right triangle. Photoelectric collimator can be used as a visual autocollimator and is available with a dark field graticule.

5. Which of the following is true for automatic position sensing autocollimator?
a) Accuracy is affected by normal mains fluctuations
b) There is no effect of lamp ageing on the accuracy of this instrument
c) Instrument measure in all planes simultaneously
d) It is not ideal for the repetitive checking
View Answer

Answer: b
Explanation: Accuracy of automatic position sensing autocollimator is not affected by lamp ageing or normal mains fluctuations. Automatic autocollimators are ideal for the repetitive checking of the components.
Check this: Mechanical Engineering MCQs | Engineering Metrology Books
advertisement

6. How many pads are included for use under the foot screws in leveling base of autocollimator?
a) 2
b) 3
c) 4
d) 5
View Answer

7. What is the main use of steel cube reflector in autocollimator?
a) To provide a 90 degree standard in 3 planes
b) For general bench use
c) Calibrate surface plate
d) For setting but not checking perpendiculars
View Answer

Answer: d
Explanation: A pair of target wires is used in this instrument. These wires are placed in the focal plane of a collimating lens. It is possible to read the tilt of reflector to normal upto 1/2 sec. of arc with the help of micrometer. The instrument has a range of readings of 10 minutes of arc up to 9 meter distance.

Answer: d
Explanation: Two reading heads are present in the goniometer. One head remains stationary while other moving with a rotatable work table. The phase difference between the outputs of heads varies continuously as the second head attached to the rotary table is moved.

Answer: a
Explanation: Advantage of goniometer is that grating errors are entirely averaged to zero during the time of measurement thus giving the inherent accuracy. With a goniometer which is fitted with two 32400 lines radial gratings, it is possible to obtain angle measurements to an accuracy of 0.1 second of arc.

12. Which of the following is not true for angle dekkor?
a) It is a type of autocollimator
b) It can be used as a comparator
c) It is a more precise instrument than autocollimator
d) It has a wide field of application without the operation of a micrometer
View Answer

Answer: c
Explanation: It is a type of collimator and contains a small illuminated scale. The instrument measures by comparing the readings obtained from a standard. This is less precise instrument than autocollimator but it has wide field of application for general angular measurement.

Answer: a
Explanation: Constant deviation prism is also known as optical square. The special property of optical square is that it always reflects the ray through the same angle, which means doesn’t depend on the angle of incident.

To practice all areas of Engineering Metrology for tests, here is complete set of 1000+ Multiple Choice Questions and Answers. 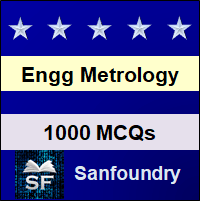