This set of Engineering Metrology Questions and Answers for Aptitude test focuses on “Grazing Incident Technique to Evaluate Surface Flatness”.

Answer: d
Explanation: A laser-based system is developed to view part surface topography using grazing incidence interferometry. It is a microprocessor based system. It can analyze more than 65,000 data points and computer flatness in less than 20 seconds.
advertisement

Answer: b
Explanation: It measures the whole part surface at one time and produces 2 and 3-D profiles with sub-micron resolution and accuracy. Test results can be viewed with the help of video screen and hard copied on a printer.

Answer: a
Explanation: In this instrument, inside the interferometer a laser beam can be expanded into 200 mm column of light. The interference pattern obtained by this process represents the shape of the part of the surface.

Answer: a
Explanation: Phase measuring interferometric system or we can say PMI can automatically interpret the interference pattern. It can capture a large number of data samples from test surface.

Answer: b
Explanation: PMI system or phase measuring interference system can capture over 2 million data samples. After capturing, it interprets them and then compiles the data into a 3-D image of the test surface.

Answer: a
Explanation: At the hypotenuse of the precision prism of the system, the light column is divided into two beams i) the reference and ii) test beam. When these beams recombine, they interfere with one another and create a series of light and dark bands or an interference pattern.

8. How the intensity variation appears at each pixel in the grazing incident technique with laser beam system?
a) As a cosine wave
b) As a sine wave
c) Straight line
d) Hyperbolic
View Answer

Answer: b
Explanation: The intensity variation at each pixel appears as a sine wave and recorded by the microprocessor. It is used to determine its relative phase. The phase differences are used to define the surface topography.

Answer: d
Explanation: The performance of measurement can be improved by striking the test beam at a grazing angle. The grazing incidence design turns non-reflective, rough surfaces into a polished mirror surface to facilitate measurement.
advertisement

10. How many diffraction gratings are used by interferometer in grazing incident technique with laser beam system?
a) 1
b) 2
c) 3
d) 4
View Answer

Answer: b
Explanation: The interferometer uses 2 linear diffraction gratings. These gratings are used to split and recombine the light into reference and test beams. The diffracted light of first order from the first grating reflects off at a grazing angle and it is the test beam. The zero order diffracted light is reference beam and passes parallel to the surface.

To practice all areas of Engineering Metrology for Aptitude test, here is complete set of 1000+ Multiple Choice Questions and Answers. 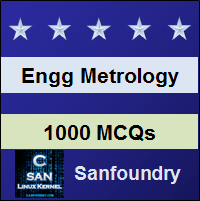