This set of Engineering Mechanics Interview Questions and Answers for freshers focuses on “Dot Product and Cross Product – 2”.

Answer: a
Explanation: The dot product of two vectors having the angle between them equal to 45° will have the product of the vector’s magnitude. As the vectors are of unit magnitude, their product will be unity. Thus the magnitude factor would be cosine function at 45 °.

Answer: b
Explanation: This statement is wrong. It is not possible unless we apply a negative sign to the RHS of the equation. That is PxQ = -(QxP). It is because, if you curl your wrist from one vector towards another vector, the thumb projected will give the direction of the cross product. Thus if you reverse the direction, a negative sign is necessary.
Note: Join free Sanfoundry classes at Telegram or Youtube
advertisement
advertisement

Answer: a
Explanation: The distributive law works just like the simple multiplication of the constant before the brackets. That is in the equation Px(Q+S) = (PxQ) + (PxS), P is crossed by Q and S both. This is simple as, if we first add the two vectors and then do the cross product or we first do the cross product and the do the sum.

Answer: b
Explanation: The associative law is defined in the cross product of three vectors. This property is though valid for the dot product. But for the cross product, it is not true. It is because, in the dot product the final result is the scalar quantity, but in a cross product it is the direction too. Thus the answer.
Take Engineering Mechanics Practice Tests - Chapterwise!
Start the Test Now: Chapter 1, 2, 3, 4, 5, 6, 7, 8, 9, 10

Answer: c
Explanation: As asked, the one which is not correct is the third one. The product is containing the cosine function, and the angle which is going to be inserted in the function is the angle between the vectors. Thus if the angle is 90, then the cross will be zero.
advertisement

9. The tendency of a force to rotate the body is called the moment of the force.
a) True
b) False
View Answer

Answer: b
Explanation: The cross product needs to take in the proper sequence. If not taken then the answer is just the opposite of the true answer. That’s why, the answer is not the Force and Radius vectors, but the Radius and Force vectors. Because the moment has its direction, as many of the cross products have, and thus precaution needs to be taken.

Answer: a
Explanation: For many vectors acting on the body, Varigon’s Theorem is defined as M = R x F (F = F1 + F2 + F3 + … vectorially adding all the forces). This is just the giving the cross product of individual force and radius vectors and thus the sum is the total moment produced.

13. What is the angle made by the vector shown in the figure, with the z-axis? 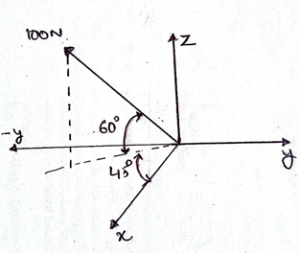 Answer: c
Explanation: The question is the tricky one, just the imagination of the viewer is to be enhanced. But is one needs to go with the calculation, one can go and the answer would be 30°. Or simply it is 90° – 60° = 30°. 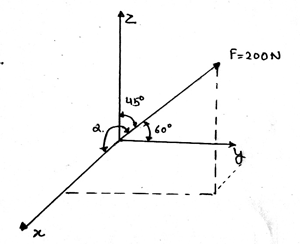 To practice all areas of Engineering Mechanics for Interviews, here is complete set of 1000+ Multiple Choice Questions and Answers.