1. A non-renewable resource is a finite resource.
a) True
b) False
View Answer

Answer: a
Explanation: A non-renewable resource does not renew itself or which can’t be regenerated after it is used. If we have used it once, we will not be able to reuse or recycle it for the second time. Some of the examples of non-renewable resources are Earth minerals, fossil fuels etc.

2. Which of the below theory is related to non-renewable resources?
a) Game Theory
b) Phlogiston Theory
c) Big Bang Theory
d) Hotelling’s Theory
View Answer

Answer: d
Explanation: This theory is proposed by Harold Hotelling. This theory states that owners of non-renewable resources will only produce a supply of their product if it will yield more value when compared to other financial instruments available to them on market like bonds and interest bearing securities.

3. Bill Gates, Chairman of the Board for Terra Power Company is associated in which of the following non-renewable resources?
a) Earth minerals
b) Fossil fuels
c) Nuclear energy
d) Metal ores
View Answer

Answer: c
Explanation: Terra Power is a nuclear energy technology company based in Bellevue, Washington. It works to raise global living standards by creating new forms of energy. The primary technology of this company is Traveling wave reactor. It activities are in the fields of nuclear energy and related sciences, which are yielding significant innovations in the safety and economics of nuclear power and hybrid-energy.
Sanfoundry Certification Contest of the Month is Live. 100+ Subjects. Participate Now!
advertisement
advertisement

4. The below schematic diagram represents which life cycle? 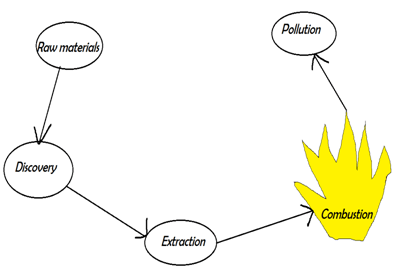 Answer: d
Explanation: In the Fossil Fuel Life Cycle various processes take place. Raw material, its discovery and extraction followed by the combustion of the raw material in order to generate necessary energy. While generating energy many harmful particles release to the atmosphere causing pollution.

Answer: b
Explanation: Coal is a naturally found fossil fuel formed by the anaerobic decay of plant life taking place over millions of years. It is extracted from the underground by coal mining. The primary composition of coal is carbon while nitrogen, oxygen, and hydrogen comes under secondary composition.
Check this: Environmental Engineering Books | Environmental Engineering MCQs

6. Which Ministry is mainly responsible for refining, distribution, import, export of petroleum products and natural gas in India?
a) Ministry of Petroleum and Natural Gas
b) Ministry of Fossil Fuel
c) Ministry of Non-Renewable Energy
d) Ministry of Oil
View Answer

Answer: a
Explanation: Ministry of Petroleum and Natural Gas is a ministry of the Government of India. The ministry is working to develop the exploration and exploitation of petroleum resources for supplementing the energy requirements of India. At present the ministry is headed by the Cabinet Minister Dharmendra Pradhan (2014-Incumbent).

Answer: b
Explanation: Oil deposits were first discovered in Assam-Arrakan Basin at Digboi in 1889. In 1901, Asia’s first oil refinery was set at Digboi in Assam. Digboi is the oldest oil well operating in India. In order to look after the oil business in this area, Assam Oil Company was formed in 1899.
advertisement

Answer: a
Explanation: Coal is the most abundantly available fossil fuel in India. There are different forms of coal available they are, 1) Peat: Peat is produced by the decaying of plants in swamps. 2) Bituminous: It derives its name after liquid called bitumen. 3) Lignite: This form is used to produce electricity. 4) Anthracite: It has more than 90% carbon content per kg and it is the best quality coal.

9. Which of the following nonrenewable energy is not classified under a fossil fuel?
a) Nuclear
b) Petroleum
c) Oil
d) Natural gas
View Answer

10. The major non-renewable energy usage in India is___________
a) Coal
b) Petroleum and other liquids
c) Natural gas
d) Nuclear
View Answer

Answer: a
Explanation: Around 50% of India’s commercial energy demand is met through the country’s vast coal reserves. Coal is cheaper than petroleum. For industrial progress cheap energy is necessity for this coal comes into picture. Due to huge presence of coal reserve it remains as the most important source of energy usage in India.

11. Natural gas is a non-renewable energy.
a) True
b) False
View Answer

Answer: a
Explanation: Yes, natural gas is a non-renewable energy. It takes millions of years to form once it is converted into energy. Natural gas is used as a fuel for vehicles. It is found in deep underground rock and some of them are found in coal beds. 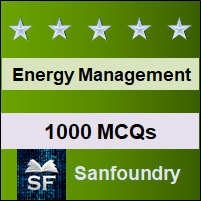