This set of Energy and Environment Management Questions and Answers for Freshers focuses on “Structure and Functions of an Ecosystem”.

1. Which one of the following is not a gaseous biogeochemical cycle in an ecosystem?
a) Carbon cycle
b) Phosphorous cycle
c) Sulfur cycle
d) Nitrogen cycle
View Answer

2. Transfer of energy from source of plants through a series of organism is known as ________________
a) Food web
b) Energy cycle
c) Food chain
d) Biological system
View Answer

Answer: c
Explanation: Food chain is a pathway that represents the exchange of energy from one organism to another. Energy is transmitted all the way from Sun to the other organisms by passing from producers to the consumers.

Answer: d
Explanation: A Tropical rain forest has more kinds of trees than any other area in the world. Seventy percent of the plants in the rainforest are trees. There are many distinct layers of trees. These layers have been identified as the emergent upper, canopy, understory and forest floor.

Answer: d
Explanation: In any ecosystem the condition of low stability and high resilience makes it to damage easily and after a certain amount of time they recover from damaging effects. Hence both stability and resilience play an important role in ecosystem.

5. Pyramids of number in grassland ecosystem are inverted.
a) True
b) False
View Answer

Answer: b
Explanation: Pyramids of number in grassland ecosystem is erect. It is the graphical representation which depicts the number of organisms, biomass and productivity at each tropic level. All ecological pyramids begin at the bottom with the producer and goes into the upper level.

8. What flows through the ecosystem while matter cycles within them?
a) Energy
b) Force
c) Pressure
d) Wind
View Answer

Answer: a
Explanation: Ecosystem maintains themselves by cycling energy and nutrients obtained from external sources. At the first tropic level, primary producers are solar energy to produce organic plant material through photosynthesis.

11. Generally ecosystem consists of how many basic components?
a) One
b) Two
c) Three
d) Four
View Answer

Answer: b
Explanation: Lake ecosystem includes both biotic and abiotic components. Zooplanktons are the organisms that have animal like traits. Most of them are heterotrophy in nature. Zooplankton is a vital component of fresh water food webs.

14. Green plants are the most important organisms for an ecosystem.
a) True
b) False
View Answer

Answer: a
Explanation: Green plants form the basis for the sustainability and long term health of the environmental system. Green plant removes carbon dioxide from the atmosphere and generates oxygen required for breathing for other organisms include humans.

To practice all areas of Energy and Environment Management for Freshers, here is complete set of 1000+ Multiple Choice Questions and Answers. 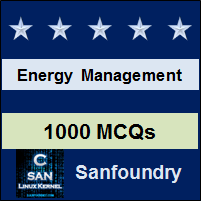