This set of Electronic Devices and Circuits Multiple Choice Questions & Answers (MCQs) focuses on “Tunnel Diodes and its Characteristics”.

Answer: d
Explanation: In forward bias, negative resistance helps for tunnel diode to operate. Here, the current decreases with increase in voltage. If they are used in reverse bias, they are called as back diodes. Avalanche diode operates in reverse bias at breakdown region.
advertisement

2. The range of tunnel diode voltage VD, for which slope of its V-I characteristics is negative would be? (The VP is the peak voltage and VV is the valley voltage).
a) VD > 0
b) 0 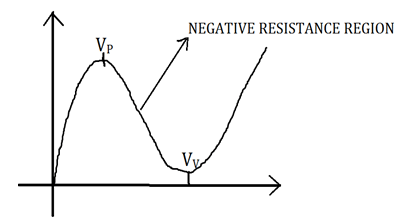 4. Which of the following are true about a tunnel diode?
1) it uses negative conductance property
2) it operates at high frequency
3) fermilevel of p side becomes higher than the n side in forward bias
a) 1 only
b) 1 and 2
c) 3 only
d) 2 and 3
View Answer

Answer: b
Explanation: The negative resistance property helps in the operation of tunnel diode. As the tunnel diode works at high frequency, its applications are mostly in that range. High frequency oscillators are based on the resonant tunneling diode.

Answer: a
Explanation: When the P and N regions are very highly doped, the depletion layer comes closer. The tunnel diode is also highly doped. Its doping concentration varies within a small scale. So it’s an abrupt diode. For these reasons, the depletion region is small.
advertisement

6. With interments of reverse bias, the tunnel current also increases because________
a) electrons move from balance band of pside to conduction band of nside
b) fermi level of pside becomes higher than that of nside
c) junction currrent decreases
d) unequality of n and p bandedge
View Answer

Answer: a
Explanation: When the forward bias is increased, the tunnel current is also increased upto a certain limit. This happens when the electron movement takes place from P to N side.

7. The tunnneling involves_______
a) acceleration of electrons in p side
b) movement of electrons from n side conduction band to p side valance band
c) charge distribution managementin both the bands
d) positive slope characteristics of diode
View Answer

Answer: b
Explanation: Tunneling means a direct flow of electrons across small depletion region from N side conduction band to P side valance band. The electrons begin to accelerate in the N side of the semiconductor.

8. Tunnel diodes are made up of________
a) Germanium and silicon materials
b) AlGaAs
c) AlGaInP
d) ZnTe
View Answer

Answer: a
Explanation: Germanium and silicon materials have low band gaps and flexibility. That matches tunnel diode requirements. The remaining materials emits the energy in terms of light or heat.

Answer: a
Explanation: The carrier jump occurs without any loss of energy due to small depletion layer. The probability of the carrier to jump across a barrier depends on the energy and width of the band. This variess exponentially for a given carrier.
advertisement

Answer: c
Explanation: Anode goes through better heat dissipation. So the pellet is used for the purpose. The tindot via mesh screen resists inductive effects caused at the cathode. Conduction is an independent factor which can’t be controlled.

11. What happens to a tunnel diode when the reverse bias effect goes beyond the valley point?
a) it behaves as a normal diode
b) it attains increased negative slope effects
c) reverse saturation current increases
d) beacomes independent of temperature
View Answer

Answer: a
Explanation: After the valley point is crossed, the tunnel diode obtains positive slope resistance. That is similar to the characteristics of a normal diode. So it behaves like a normal diode after beyond valley point.

To practice all areas of Electronic Devices and Circuits, here is complete set of 1000+ Multiple Choice Questions and Answers. 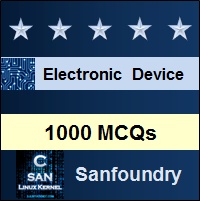