Answer: a
Explanation: The reading in an energy meter is obtained correctly when the torque value is small at low loads. It is independent of the load on the meter an acts in the same direction as the driving torque.
advertisement

Answer: b
Explanation: Friction can be compensated in an energy meter by making use of a shading loop. It is placed between the central limb of the shunt magnet and a disc. Figure below illustrates the same. 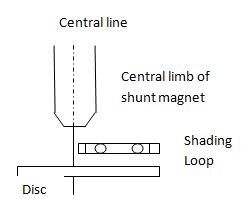 3. Driving torque is small and is adjustable.
a) True
b) False
View Answer

Answer: a
Explanation: Interaction between the parts of the shaded and unshaded fluxes, obtained through a shading loop leads to a small driving torque. The value of the torque can be adjusted through lateral movement of the loop.

4. Friction torque is eliminated by _________
a) using lubricating oil
b) by suspending the components in air
c) by adjusting the position of limb
d) by using steel alloy components
View Answer

Answer: c
Explanation: We can eliminate the friction torque completely by adjusting the position of the shading loop. This enables in providing compensation for the frictional torque.
advertisement
advertisement

5. Frictional errors are dominant in an energy meter.
a) True
b) False
View Answer

6. At full load, disc __________
a) partially revolves and then stops
b) continuously revolves
c) does not revolve at all
d) revolves in an alternating fashion
View Answer

Answer: b
Explanation: When an energy meter is operated in full load condition, disc revolves continuously due to the field of the series magnet. As a result, an e.m.f is induced in the disc.

Answer: c
Explanation: In an energy meter, the self braking torque is dependent on the square of the load current. As a result the disc rotates at a slightly slower speed at high value of loads.
advertisement

Answer: d
Explanation: In an energy meter we can minimise or eliminate the self braking action by keeping the disc speed as low as possible at full load condition. This is achieved by maintaining the flux due to the current coil smaller than that due to the shunt coil. The figure below shows the compensating device.

Answer: a
Explanation: Magnetic shunt reaches saturation at overloads. As a result, its permeability reduces. Hence the overload compensating device takes the form of a magnetic shunt.

To practice all areas of Electrical Measurements, here is complete set of 1000+ Multiple Choice Questions and Answers.