Answer: b
Explanation: Chopper has a perfect DC at the input which is chopped into pulses which means the output voltage is discontinuous and by varying the duty cycle we can vary the average output voltage.

Answer: d
Explanation: For a buck converter current ripple doesn’t depend on the value of E. ΔIL = Vdc×D×(1-D)×T÷L. The expression is independent of the value of E.
Subscribe Now: Electrical Drives Newsletter | Important Subjects Newsletters

4. The conduction loss versus device current characteristic of a power MOSFET is best approximated by a ________
a) Straight line
b) Rectangular hyperbola
c) Parabola
d) Exponential decaying functions
View Answer

Answer: c
Explanation: A MOSFET in ON state behaves as resistance so the conduction power loss is given by, P=I2R. Hence, the power vs current curve will be a parabola.

5. Which of the following device is NOT suitable for parallel operation?
a) MOSFET
b) BJT
c) IGBT
d) TRIAC
View Answer

Answer: b
Explanation: BJT has a negative temperature coefficient of resistance. If it is operated in parallel operation thermal run-away will take place and the device will damage.
Become Top Ranker in Electric Drives Now!

6. SCR is uni-directional in nature.
a) True
b) False
View Answer

Answer: a
Explanation: SCR is uni-directional in nature. It only allows current to flow from anode to cathode. If the current is greater than the latching current then only it will work in forwarding conduction mode.

7. Which of the following device should be used as a switch in a low power switched mode power supply (SMPS)?
a) GTO
b) BJT
c) MOSFET
d) TRIAC
View Answer 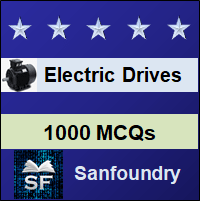