1. Which one of these options is not one of the limitations of pH-partition theory?
a) Presence if virtual membrane pH
b) Absorption of ionized drugs
c) Influence of GI surface area
d) Dissolution rate
View Answer

Answer: d
Explanation: Some of the deviations of the pH-partition hypothesis are the presence of virtual membrane, absorption of the ionized drug, the influence of GI surface area and residence time, Presence of aqueous unstirred diffusion layer.
advertisement

2. A microclimate pH, different from the luminal pH exists at the membrane surface.
a) True
b) False
View Answer

Answer: a
Explanation: As shown in experiments, pH absorption curves are less steep and shift to left for basic drug and shift to the right for an acidic drug. This led to the hypothesis that a virtual pH also called a microclimate pH exists at the membrane surface.

3. According to the pH-partition theory which form of the drug gets absorbed mostly?
a) Hydrated form
b) Aggregated form
c) Ionised
d) Unionised
View Answer

Answer: d
Explanation: According to the pH-partition theory, a unionized form of a drug gets absorbed mostly. Ionized drugs have low lipid solubility and poor permeability.
advertisement
advertisement

Answer: c
Explanation: Ionised drugs if attached with a large lipophilic group in their structure. This helps them in getting absorbed passively e.g. morphine derivatives.

Answer: c
Explanation: Experiments showed that irrespective of the GI pH and the degree of ionization, most of the acidic and basic drugs are more rapidly absorbed from the intestine. The 1st reason because of large surface area and second reason due to high residence time. Answer: b
Explanation: The luminal fluid is not in direct contact with the membrane. There stands a barrier called as the aqueous unstirred diffusion layer which is interposed between the bulk fluid and the lipoidal membrane.
advertisement

8. Drug having a small partition coefficient can rapidly penetrate the lipid membrane but diffusion through the unstirred water layer is a rate-limiting step.
a) True
b) False
View Answer

Answer: b
Explanation: Drugs having a large partition coefficient can rapidly penetrate the lipid membrane but diffusion through the unstirred water layer is a rate-limiting step. This applies particularly to high molecular weight fatty acids and bile acids.

Answer: d
Explanation: A drug for oral use may destabilize either during its shelf life or in the GIT. Thus giving up to two major destabilizing problems that give rise to bioavailability problems are degradation of the drug in inactive form and interaction with one or more different components of the formulation.
advertisement 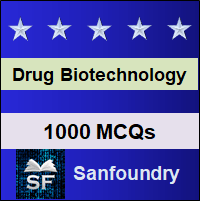