This set of Drug Biotechnology Interview Questions and Answers for freshers focuses on “Drugs Absorption from Non Oral Extravascular Sites – 2”.

Answer: a
Explanation: Drug administration when done through placing it under the tongue and from where it will slowly get dissolved through saliva is known as sublingual administration. Placing the drug between the cheek and the gum is buccal route of drug administration.

3. Which one of the following is not an advantage of sublingual or buccal administration?
a) Rapid absorption and higher blood levels
b) No first-pass hepatic metabolism
c) No degradation of drugs
d) Limited surface area
View Answer

Answer: d
Explanation: The advantage of the sublingual and buccal route is rapid absorption, higher blood level due to the high vascularization of the oral cavity. No first-pass hepatic metabolism that is no passing through the liver. No degradation of drugs such that encountered in the GIT. The presence of saliva helps in drug dissolution and its permeation.

4. Which is the largest organ of the human body?
a) Liver
b) Stomach
c) Skin
d) Lungs
View Answer

Answer: c
Explanation: The largest organ of the body is the skin. The weight is approximately 2kg and the surface area is about 2-meter square. It receives about 1/3rd of the total blood circulation of the body.

5. What is the principal barrier for the drugs on the topical application?
a) The Dermis
b) The subcutaneous fat tissue
c) The stratum corneum
d) The blood vessels below the skin
View Answer

Answer: c
Explanation: The principal barrier to the entry of xenobiotics is the most superficial layer of the epidermis called the stratum corneum. It is composed of dead, keratinized, metabolically inactive cells. It acts as a major rate limiting barrier to passive diffusion of the drugs.
advertisement

Answer: a
Explanation: The decreasing order of the blood flow to the muscular tissue is in the order Arm > thigh > buttocks. The blood flow rate is a rate-limiting step in the absorption of drugs from i.m. sites. Most rapid absorption is from deltoid muscles and slowest from the gluteal region.

7. Which of the following drug is not intended for pulmonary administration?
a) Bronchodilators
b) Antiallergics
c) NSAIDs
d) Anti-inflammatory steroids
View Answer

Answer: c
Explanation: Pulmonary administration route is having been limited for administering drugs that affect pulmonary systems such as bronchodilators, anti-inflammatory steroids, and anti-allergic. Lipid soluble drugs are absorbed by passive diffusion.

8. A drug in the concentrated injection is absorbed faster.
a) True
b) False
View Answer

Answer: a
Explanation: Volume of injection and drug concentration matters a lot for absorption and bioavailability. A drug in concentrated injection and large volume is absorbed faster than when given in the dilute form and small volume.

9. Intramuscular drug absorption is faster than intravascular.
a) True
b) False
View Answer

Answer: b
Explanation: Absorption of the drug from intramuscular is fast. But it relatively slower than intravascular injections. Since intravascular is given directly to the veins the bioavailability is huge.
advertisement

10. Several factors such as the thickness of stratum corneum, presence of hair follicles, trauma, hydration of the skin, Grooming, exposure to chemicals determine the passive absorption of drugs from the surface of the skin to below.
a) True
b) False
View Answer

Answer: a
Explanation: The statement is true. The thickness of stratum corneum, presence of hair follicles, trauma, hydration of skins, grooming, exposure to the chemicals determine the passive absorption of drugs from the surface of the skin to below. This list also includes the age of the patient, the environment humidity, and temperature, permeation of the enhancers and use of other drugs.

To practice all areas of Drug Biotechnology for Interviews, here is complete set of 1000+ Multiple Choice Questions and Answers. 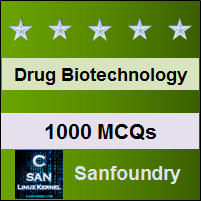