1. The only persons regulated by federal orders are _____
a) Farmers
b) Truckers
c) Handlers
d) Retail store owners
View Answer

Answer: c
Explanation: In Federal order provisions, dairy processors are referred to as handlers and dairy farmers are known as producers. Handlers are regulated by federal orders.
advertisement

2. The increased use of bulk cooling and storage equipment has made _____ bacteria the primary organisms in raw milk.
a) Psychrophilic
b) Coliform
c) Staphylococcus
d) Streptococcus
View Answer

Answer: a
Explanation: Psychrophiles or cryophiles (adj. cryophilic) are extremophilic organisms that are capable of growth and reproduction in cold temperatures, ranging from −20 °C to +10 °C. The growth of psychrophilic bacteria has tremendously increased due to bulk cooling and storage.

3. _____ is the cause of the rancid flavor in milk.
a) Feeding high moisture corn
b) Feeding haylage
c) Storing milk in the sunlight
d) Extreme agitation of raw milk
View Answer

Answer: d
Explanation: Racidilty is the result of fat oxidation. In milk, it is caused due to excessive agitation of raw milk which leads to a breakdown of fat molecule exposing them to oxidation.

4. Which of the following does not promote metallic/oxidized off flavor in milk?
a) Hypochlorite sanitizer
b) Sunlight
c) Fluorescent light
d) Copper
View Answer

Answer: a
Explanation: Milk with a cardboardy or metallic taste is more common in milk during the winter and early spring. The off- flavor can be detected in raw milk, but sometimes not until two days after collection. Hypochlorite doesn’t promote metallic off flavor in milk.

Answer: b
Explanation: Brand differentiation is not one of the objectives of milk evaluations. Its objective includes determining the presence of desirable characteristic etc.

Answer: c
Explanation: Mastitis is a cow disease in a cow. It is due to microorganisms that enter mammary gland via streak canal.

8. A _____ cup is a cup with fine wire mesh on top used to detect the presence of abnormal milk.
a) Striated
b) Mesh
c) Streak
d) Strip
View Answer

9. A _____ needs to be applied to the teat end in order for a milking machine to remove milk.
a) Massaging action
b) Pulsation
c) Vacuum
d) Pressure
View Answer

Answer: c
Explanation: A vacuum is applied to the teat end. This helps to remove milk from the milking machine.
advertisement

Answer: a
Explanation: Certain aldehydes give malty flavor. They are produced by streptococci that produce lactic acid.

12. By using a _____ with plastic beads of varying density, nonfat solids in milk can be rapidly estimated.
a) Lactometer
b) Hydrometer
c) Humidoscope
d) Polyscope
View Answer

Answer: b
Explanation: A hydrometer is an instrument that measures the specific gravity (relative density) of liquids—the ratio of the density of the liquid to the density of water. a hydrometer with plastic beads varying density would help in estimation of non fat solids.

Answer: b
Explanation: Casein and lactalbumin are main protein present in milk. Milk is a good source of protein.
advertisement

Answer: a
Explanation: Vitamin A is a fat soluble vitamin that is also a powerful antioxidant. Vitamin A plays a critical role in maintaining healthy vision.

15. Milk contains all the known vitamins and is an especially good source of ___
a) Cyanocobalmin
b) Riboflavin
c) Ascorbic Acid
d) Thiamine
View Answer

Answer: b
Explanation: Riboflavin, also known as vitamin B2, is a vitamin found in food and used as a dietary supplement. Milk is also a good source of riboflavin.

To practice all areas of Dairy Engineering for online tests, here is complete set of 1000+ Multiple Choice Questions and Answers. 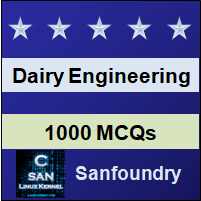