This set of Clinical Science Questions and Answers for Aptitude test focuses on “Nerve Conduction Velocity”.

Answer: b
Explanation: When a cell fibre is stimulated, that becomes the action potential that spreads all over and causes the body to function. This action potential is caused due to depolarization which travels throughout the body as nerve impulses.
advertisement

2. The impulses travel faster when _________
a) the axon has myelin sheath
b) the axon does not have myelin sheath
c) the cyton is small
d) the dendrites are longer
View Answer

3. What is the jumping of impulses between the Nodes of Ranvir called?
a) Ionic Impulses Exchange
b) Alternative Depolarization
c) Saltatory Conduction
d) Impulse Jumping
View Answer

4. Which of the following can help determine the extent of nerve damage?
a) EMG
b) EEG
c) Nerve Conduction Velocity Test
d) BUN Test
View Answer

Answer: c
Explanation: As the name suggests, Nerve Conduction Velocity test is done to determine the speed with which the nerves are able to transmit the impulses. It may be done along with an EMG. It helps in detecting if the disorder is neural or muscular.
advertisement

Answer: c
Explanation: For a simple NCV test, 2 electrodes are enough. The electrodes are placed on two points in such a way that they lie on the same conduction path. One electrode is stimulated and the impulse generated travels down the path and the other electrode receives the signal. The time taken to travel the distance is noted along with the strength of the received signal.

6. If the doctors suspect peripheral neuropathy in the legs, where will the electrodes be placed?
a) At the buttocks
b) At the thighs
c) At the calves
d) At the feet
View Answer

Answer: d
Explanation: Peripheral neuropathy is a disease that mostly affects the peripherals of the body, like the palms or feet. The nerves have faced some sort of trauma or some damage which results in pain, numbness and tingling sensations. These symptoms are mostly expressed at the feet or at the palms so if the doctor suspects peripheral neuropathy at the legs, feet is where they will choose to put the electrodes.

Answer: c
Explanation: Carpel Tunnel Syndrome is a mononeuropathy disorder in which the median nerve in the wrist has been impinged. This impingement happens due to the swelling of the tendons or the nerve has swelled.
advertisement

8. To test for sciatica, where will the electrodes be placed?
a) From the shoulder to elbow
b) From lower back to a knee
c) From elbow to wrist
d) From knee to ankle
View Answer

9. Which of the following can be a result of spinal disk herniation?
a) Sciatica
b) Spondylolisthesis
c) Spondylosis
d) Peripheral Vascular Disease
View Answer

Answer: a
Explanation: Sciatica happens when the nerves originating from the lower back, i.e. around the lower lumbar region or the sacral region are getting pressed. Spinal Disk Herniation is more commonly called as slip disk, a condition in which the disk in has moved or inflamed in the vertebral column and is pressing up against the spinal chord. Spondylosis is the degeneration of the vertebral column while spondylolisthesis happens when the vertebra is impinging the nerves. It is another reason for sciatica. Peripheral Vascular Disease is when the blood vessels of the peripheries, mostly legs are impinged or blocked.

To practice all areas of Clinical Science for Aptitude test, here is complete set of 1000+ Multiple Choice Questions and Answers. 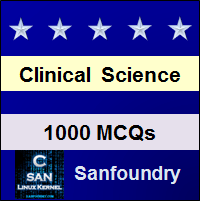