3. Which of the following returns a signed integer type on finding the difference between two pointers to elements in the same array?
a) __cptrdiff__
b) cptrdiff_t
c) __ptrdiff__
d) ptrdiff_t
View Answer

Answer: d
Explanation: ptrdiff_t is used for pointer arithmetic and array indexing. Only pointers to elements of the same array may be subtracted from each other.

Answer: b
Explanation: The type ptrdiff_t, defined under the file stddef is used to find the difference between two pointers pointing to elements of the same array. Hence the output of the above code is -5.
advertisement

5. What will be the output of the following C code?

Answer: c
Explanation: The ASCII value ‘a’ is 97 and that of ‘A’ is 65. Their difference is equal to 32. Hence the output of the code shown above is 32.
advertisement

6. Which of the following is not defined under the header file stddef.h?
a) size_t
b) ptrdiff_t
c) exp_t
d) null
View Answer

Answer: c
Explanation: size_t, ptrdiff_t and NULL are defined under the file stddef.h. There is no type called exp_t c language.

7. Point out the error (if any) in the following C code?

Answer: d
Explanation: The code shown above does not result in an error. However, since ptr is not equal to NULL, it does not print anything.

Answer: a
Explanation: offsetof expands to a constant of type size_t. It retuns the offset of the field member from the start to of the structure type.

Answer: b
Explanation: alignas is one of the types used to modify the alignment requirement of the object being declared. When more than one alignas specifier is used in the same declaration, the strictest one is used.

To practice all areas of C language, here is complete set of 1000+ Multiple Choice Questions and Answers. 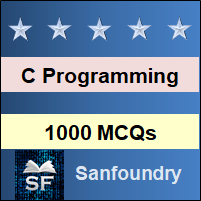