Answer: c
Explanation: The viscosity of a suspension of spheres in Newtonian liquid can be predicted using the Vand equation, where μL is the viscosity of the suspending liquid and Φ is the volume fraction of solids.This equation has been found to hold for yeast and spore suspensions up to 14 vol% solids.
advertisement

3. The temperature is directly proportional to viscosity.
a) True
b) False
View Answer

4. The pressure is directly proportional to viscosity?
a) True
b) False
View Answer

Answer: a
Explanation: Viscosity increases with increasing pressure because the amount of free volume in the internal structure decreases due to compression. Consequently, the molecules can move less freely and the internal friction forces increase. The result is an increased flow resistance.

6. If the particle size is small in fluid than viscosity will ___________
a) Increase
b) Decrease
c) Remain the same
d) Slightly increase
View Answer

Answer: b
Explanation: The size of the particles of a substance will greatly affect its viscosity. Small particles can move more easily past each other and can therefore flow faster, meaning they have a lower viscosity. Large particles would mean a higher viscosity.

7. The force of attraction between the particles is directly proportional to viscosity.
a) True
b) False
View Answer

To practice all areas of Bioprocess Engineering, here is complete set of 1000+ Multiple Choice Questions and Answers. 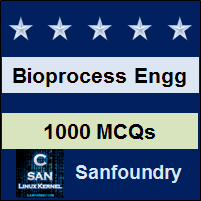