3. The principal ion that is not involved with the phenomena of producing cell potentials is ______________
a) sodium
b) potassium
c) chlorine
d) hydrogen
View Answer

5. The variation of the electrical potential associated with the passage of a pulse along the membrane of a muscle cell or a nerve cell is called __________
a) muscle potential
b) action potential
c) resting potential
d) half cell potential
View Answer

6. Cells depolarize and action potential in generated as soon as a stimulus is applied.
a) True
b) False
View Answer

Answer: b
Explanation: This statement is False. This is because unless a stimulus above a certain minimum value is applied, the cell will not be depolarized and no action potential will be generated. This value of potential above which the depolarizes and an action potential is generated is known as the stimulus threshold.

7. After a cell is stimulated, a finite period of time is required for the cell to return to its pre-stimulus state. This period is known as ____________
a) restoration period
b) refactory period
c) regain period
d) regenerative period
View Answer

Answer: b
Explanation: After a cell is stimulated, a finite period of time is required for the cell to return to its pre-stimulus state. This is because the energy associated with the action potential is developed from metabolic process within the cell which takes time for completion. This time period is called refactory period.
advertisement

8. Electrooculography (EOG/E.O.G.) is a technique for measuring what?
a) abnormal function of the retina
b) heart rate
c) respiration rate
d) cornea-retinal standing potential
View Answer

Answer: d
Explanation: Electrooculography (EOG / E.O.G) is a technique for measuring the potential of the corneal retinal standing potential that exists between the front and back of the human eye. The resulting signal is called electrooculogram. The main applications are in the diagnosis of ophthalmology and the recording of eye movements.

Answer: a
Explanation: Electrocardiography (ECG or EKG) is the way toward recording the electrical action of the heart over some stretch of time utilizing anodes put on the skin. It could simply be understood as the electrical representation of heart beat. Electroencephalography is the electrical recording of brain.
advertisement

To practice all areas of Biomedical Instrumentation, here is complete set of 1000+ Multiple Choice Questions and Answers.

» Next - Biomedical Instrumentation Questions and Answers – Recording Electrodes
Next Steps: 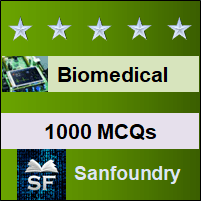