Answer: b
Explanation: The first passenger train in India started in 1853 with around 400 passengers, 3 coaches between Boribundar and Thane.
advertisement

2. Name the organization which is the research and development wing of Indian Railways.
a) CRIS
b) RDSO
c) RSDO
d) IRCTC
View Answer

Answer: b
Explanation: The RDSO (Research, Designs and Standards Organization) acts as the technical advisor and consultant to the Ministry of Railways and their production units.

Answer: a
Explanation: Degree of freedom refers to the number of directions in which a vehicle can move. Since trains have to run on the provided tracks, their movement is restricted to one direction only, compared to road transport which can move in x, y and z directions.
advertisement
advertisement

Answer: d
Explanation: The track modulus defines the stiffness of track or its load bearing capacity. It is based on the elastic theory. When a load causes a deflection on the top of the rail, the deformation comes on the sleeper, below the rail.

5. The track modulus is not affected by gauges.
a) True
b) False
View Answer

Answer: b
Explanation: As the three gauges (narrow-NG, metre –MG and broad-BG) increases, the components of the permanent part (like ballast and sleeper) also increases in size. As a result track modulus also increases. The recommended track modulus is: BG = 70 to 90kg/cm2, MG=42-54kg/cm2 and NG=30kg/cm2.
advertisement

6. Which of the following causes stresses in Sleepers?
a) Eccentric vertical loads
b) Contact shear stress of wheel and rail
c) Lateral deflection of sleepers
d) Track components
View Answer

Answer: d
Explanation: The track components like the track modulus, the stiffness of rail, design of the sleeper, sleeper density (number of sleepers provided) and their load bearing capacity are factors which cause stresses in sleepers. The other 3 options are responsible for stresses in rails.

Answer: b
Explanation: The selection of the rail section depends on many factors like heaviest axle loads, maximum permissible speed, type of sleepers and depth of ballast cushion. If the depth of the ballast cushion is less, then a bigger rail section has to be provided.

10. What must be done to wooden sleepers before use?
a) Seasoning
b) Washing
c) Painting
d) Hydrating
View Answer

Answer: a
Explanation: The wood for the sleepers is taken directly from the trees and they contain moisture. In order to reduce the moisture content, seasoning is adopted. In India, air seasoning is the most commonly used method.

To practice all areas of Basic Civil Engineering, here is complete set of 1000+ Multiple Choice Questions and Answers. 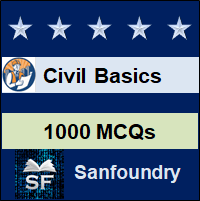