This set of Artificial Intelligence online test focuses on “Learning – 3”.

1. Which is not a desirable property of a logical rule-based system?
a) Locality
b) Attachment
c) Detachment
d) Truth-Functionality
View Answer

Answer: b
Explanation: Locality: In logical systems, whenever we have a rule of the form A => B, we can conclude B, given evidence A, without worrying about any other rules. Detachment: Once a logical proof is found for a proposition B, the proposition can be used regardless of how it was derived .That is, it can be detachment from its justification. Truth-functionality: In logic, the truth of complex sentences can be computed from the truth of the components. However, there are no Attachment properties lies in a Rule-based system. Global attribute defines a particular problem space as user specific and changes according to user’s plan to problem.

2. How is Fuzzy Logic different from conventional control methods?
a) IF and THEN Approach
b) FOR Approach
c) WHILE Approach
d) DO Approach
View Answer

Answer: a
Explanation: FL incorporates a simple, rule-based IF X AND Y THEN Z approach to a solving control problem rather than attempting to model a system mathematically.

Answer: b
Explanation: The problem of unsupervised learning involves learning patterns in the input when no specific output values are supplied. We cannot expect the specific output to test your result. Here the agent does not know what to do, as he is not aware of the fact what propose system will come out. We can say an ambiguous un-proposed situation.
Subscribe Now: Artificial Intelligence Newsletter | Important Subjects Newsletters

Answer: a
Explanation: Inductive learning involves finding a consistent hypothesis that agrees with examples. The difficulty of the task depends on the chosen representation.

Answer: b
Explanation: Computational learning theory analyzes the sample complexity and computational complexity of inductive learning. There is a tradeoff between the expressiveness of the hypothesis language and the ease of learning.
Get Free Certificate of Merit in Artificial Intelligence Now!

Answer: b
Explanation: Neural networks parameters can be learned from noisy data and they have been used for thousands of applications, so it varies from problem to problem and thus use nonlinear functions.
advertisement

Answer: a
Explanation: A perceptron is a Feed-forward neural network with no hidden units that can be representing only linear separable functions. If the data are linearly separable, a simple weight updated rule can be used to fit the data exactly.

Answer: a
Explanation: Not all formal languages are context-free.
advertisement

Answer: d
Explanation: The union and concatenation of two context-free languages are context-free; but intersection need not be. 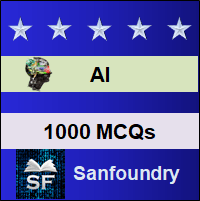