1. The most common reason for the degradation of petroleum oil is their _________
a) Volatility
b) Oxidation
c) Reduction
d) Temperature coefficient
View Answer

Answer: b
Explanation: Oxidation inhibitors are one of the types of the additives. The oxidation is the main reason for the petroleum oil degradation. At high temperatures, the hydro carbons of the petroleum oil undergo homolytic fission to generate free radicals.
advertisement

Answer: a
Explanation: After the homolytic fission of the petroleum oil to produce free radicals and they react with oxides to form the hydrogen peroxides. Some hydro peroxides decompose to form the aldehydes, ketones etc. If they are reacted with hydrogen peroxide then the chain will be terminated.

5. To reduce the wear and tear of the gears ____________ are used.
a) Anti wear agents
b) Rust inhibitors
c) Oxide inhibitors
d) Dispersants
View Answer

Answer: d
Explanation: In steel and steel lubrication, the zinc dithiosulphates forms the zinc oxide, zinc sulphide and ferrous oxide and some other zinc organo phosphates. They prevent the wear and tear of steel.

Answer: a
Explanation: The friction modifiers are used in the auto mobile applications. Mild extreme pressure agent in boundary lubrication conditions are, they prevent stick slip oscillations and control noise in the automatic transmissions.
advertisement

8. Friction modifiers have 12-18 carbons.
a) False
b) True
View Answer

11. On cooling below the pour point, the wax will be __________
a) Evaporated
b) Condensed
c) Crystallized
d) Sublimated
View Answer

Answer: c
Explanation: On cooling below the pour point, the wax will be crystallized and the additive molecules will protect them from crystallization as they will be adsorbed on the surfaces of the crystals.

Answer: a
Explanation: The viscosity index can be improved by adding linear polymers like poly isobutyls and poly methacrylates and poly alkyl styrene. They range from 10000 to 100000 molecular weight. They increase the viscosity and retains the original viscosity coefficient.

Answer: b
Explanation: Foam inhibitors are used for preventing the foaming of oil in internal combustion engines. Methyl silicone polymers are used as effective foam inhibitors.they are not soluble in oil they help in breaking form bubbles.

15. vegetable oils are added to the lubricants to improve their ___________
a) Lubrication
b) Oiliness
c) Viscosity
d) Efficiency
View Answer

Answer: b
Explanation: Oiliness can be improved by adding vegetable oils, castor oils and olive oil to the lubricants. The compounds having strong polar groups like dibenzyl dilsulphide, amyl phenyl phosphate are used as oiliness improvers.

To practice all areas of Applied Chemistry, here is complete set of 1000+ Multiple Choice Questions and Answers. 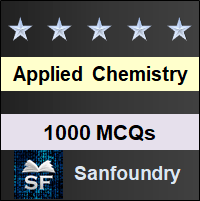