1. Which of the following is the lowest layer of atmosphere?
a) Troposphere
b) Stratosphere
c) Ionosphere
d) Outer atmosphere
View Answer

Answer: a
Explanation: Troposphere is the lowest layer in the atmosphere ranging up to 15km. stratosphere lies at 50 to 90km and up to 400km ionosphere. Above 400km is the outer atmosphere.

Answer: a
Explanation: Region of calm is also known as stratopause. It is at 20 to 70km. Troposphere is up to 15km and above 400km is the outer atmosphere.

3. In which of the following layer of atmosphere free electrons and ions are present?
a) Troposphere
b) Stratosphere
c) Ionosphere
d) Outer atmosphere
View Answer

Answer: c
Explanation: In ionosphere ionization occurs so there are free electrons, positive and negative ions are also present. It is at 110- 400km range from earth surface.

6. Which of the following is the top region during night hours in ionosphere?
a) D layer
b) E layer
c) F2 layer
d) F layer
View Answer

Answer: d
Explanation: During night time D layer disappears and F1, F2 will combine to form a single F layer. So F layer is top in the Ionosphere during night hours and F2 is top at day time.

7. Ionospheric reflections in the shape of M –type occurs between Es and D layers
a) True
b) False
View Answer

Answer: b
Explanation: Ionospheric reflections in the shape of M –type occurs between Es (layer formed due to the ions of clouds, thunderstorms etc) and higher F layers if the layers are smaller compared to the wavelengths. These M-type reflections take a single path in E layer.

8. Which of the following layer is used mostly for the long distance communication?
a) Troposphere
b) Stratosphere
c) Ionosphere
d) D layer during night hours
View Answer

Answer: c
Explanation: Ionosphere is most widely used for long distance communication and it lies at 90 to 400km from earth surface. D layer is not present at night hours.

Answer: a
Explanation: Stratosphere is present at 20 to 70km from earth surface. Troposphere is up to 15km and above 400km is the outer atmosphere.

Answer: a
Explanation: During night time D layer is not present. F1 and F2 layers get combined to form an F layer during night time. Therefore only two layers namely E and F are present at night time. 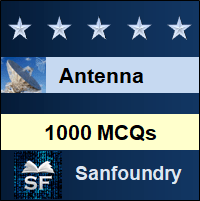