Answer: a
Explanation: The fixed bias circuit has been seen to offer low stability with respect to change in ICO. The Voltage divider bias provides the most stable biasing mechanism. Hence, the collector feedback configuration is better than the fixed bias configuration while C.E. and C.B. are not biasing stages.
advertisement

2. The Collector feedback is done by connecting a resistor from the collector to the __________
a) Emitter
b) Base
c) Supply voltage
d) Bias voltage
View Answer

Answer: b
Explanation: The collector feedback configuration is done by connecting a resistor from the collector to the base voltage. This is done to stabilize the biasing voltage against thermal runaway.

5. Due to the Collector feedback mechanism, the transistor remains always remains in the __________
a) Active mode
b) Saturation mode
c) Inverse Active
d) Cut-off
View Answer

7. What kind of configuration is this? 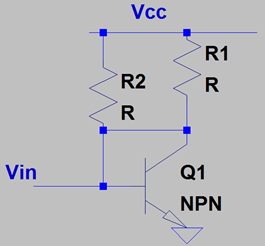 Answer: d
Explanation: The transistor isn’t biased since the voltage drop from the base to the collector is 0. The transistor action won’t get be manifested.

8. If the current gain of the transistor is β, what is the stability factor pertaining to IC and ICO? 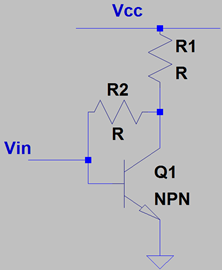 9. To keep the B.J.T. in the active region, what should be the relation between R1 and R2?

Answer: b
Explanation: The feedback resistance should be much smaller than the collector resistance since we need to reduce the sensitivity of the collector current to the current gain. Typically, R2 should be lower than R1 by a factor of β.
advertisement

Answer: b
Explanation: This can be simply observed from the stability factors of both cases. The correct factor is 1 + β * R1/(R1 + β).

Answer: c
Explanation: This is easily derived from the Collector feedback configuration by using the method of K.V.L. deriving a relation between the collector current and the base emitter voltage. It should be noted that the stability against VBE increases in comparison to the base bias comparison.

12. What is the condition of stability of the following circuit? 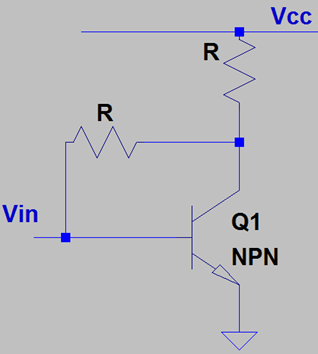 13. If β = 100, what should be the ratio of the collector to base resistance for achieving insensitivity to β?

Answer: d
Explanation: The Base resistance should be substantially lower than the Collector resistance by a factor of β. 110 is a good choice but provided 140 is present as an option, a better choice is a factor of 140.
advertisement

Answer: a
Explanation: If we change the device, β changes. But we want to keep the q-point stable so that circuit if represented as a black box, would provide the same characteristics and not be highly dependent on the transistor. Hence, we want to make the circuit insensitive to β.

15. The stability factors change from npn to pnp transistor.
a) True
b) False
View Answer

Answer: b
Explanation: The stability factors are independent of whether the transistor is of npn or pnp type. It is only dependent on β and the impedance connected to the terminals of the transistor of a hyperbola. 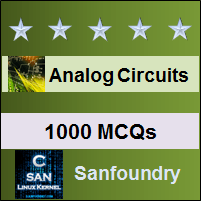