Answer: a
Explanation: The allocation of flow forces to the airframe drag or to the propulsive thrust is known as the thrust drag. It is important to distinguish these force contributions else there results a wrong estimation of the aircraft performance.

Answer: c
Explanation: The equation for net thrust is given by FN=ṁ(Vj-V) where FN is net thrust, ṁ is mass flow rate, Vj is exit velocity and V is inlet velocity. In other words the net propulsive force is the difference between the stream force entering and leaving the engine.

6. The velocity of the engine exhaust flow is a function of the temperature of the exhaust gas.
a) True
b) False
View Answer

Answer: a
Explanation: The velocity of the engine exhaust flow is a function of the temperature of the exhaust gas and this can be determined by the throttle setting. For any given engine thrust setting the exhaust gas velocity can be considered constant.

To practice all areas of Aircraft Performance for Experienced people, here is complete set of 1000+ Multiple Choice Questions and Answers. 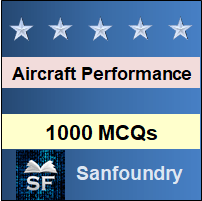