1. Landing gear systems are the _________ of an aircraft.
a) Left carriage
b) Over carriage
c) Undercarriage
d) Right carriage
View Answer

Answer: c
Explanation: Landing gear systems are retractable systems which form the undercarriage of an aircraft. These systems are primarily used while landing, takeoff and taxi and its failure during these phases may prove fatal.

Answer: a
Explanation: Landing gear was previously referred to as alighting gear. This was during the early years of powered flight and post the Second World War these gears have been called landing gears.

3. The landing gear supports the aircraft when it is flying.
a) False
b) True
View Answer

Answer: a
Explanation: False, the landing gear supports the aircraft when it is not flying. It allows the aircraft to take off, land, and taxi without any damage.
Sanfoundry Certification Contest of the Month is Live. 100+ Subjects. Participate Now!
advertisement
advertisement

Answer: b
Explanation: VTOL in typical aircraft terminology refers to vertical take-off and landing. This technique is currently being developed and can be seen as a modern approach to flying. It does not require long runways to take off and land.

Answer: a
Explanation: Landing gears fold away during flight to reduce drag. Faster aircrafts usually have such retractable undercarriages that can be easily retracted via FBW systems.
Check this: Aircraft Maintenance Books | Aeronautical Engineering MCQs

Answer: a
Explanation: The Concorde had a retractable tail bumper wheel. This is because delta winged aircraft such as the Concorde needed a high angle when taking off.
advertisement

8. Which of the following is the compartment where the wheels are stowed in a retractable landing gear system?
a) Wheel dumper
b) Wheel store
c) Wheel wells
d) Wheel safe
View Answer

Answer: c
Explanation: The wheels of an aircraft are stowed in a compartment known as the wheel well. The wheels are stowed up using the retractable landing gear system that is fitted onboard an aircraft.

10. Three greens refer to the landing gear being down and locked.
a) False
b) True
View Answer

To practice all areas of Aircraft Maintenance, here is complete set of 1000+ Multiple Choice Questions and Answers. 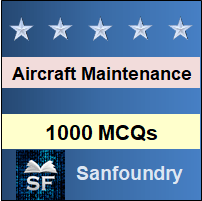