This set of Advanced Surveying Questions and Answers focuses on “Triangulation – Satellite Station: Reduction to Centre “.

1. Which of the following can describe the main purpose of the satellite station?
a) Act as false station
b) Act as true station
c) Measuring length
d) Measuring diameter
View Answer

Answer: a
Explanation: The main purpose of the satellite station is to act as an eccentric station or a false station. For securing well conditioned triangle some of the objects like flag poles, towers, were chosen as satellite station.
advertisement

2. The recordings taken from eccentric station are more precise.
a) False
b) True
View Answer

Answer: b
Explanation: Satellite station involves in adopting the place where instrument can’t be placed. So, this might have an opportunity to create error in the recordings taken which can be further removed by applying corrections. The recordings taken are near to precise value.

Answer: d
Explanation: The phase correction is actually used for determining the eccentricity of the signal. The observations of this signal can be made by placing the station out of the center, which is essential to correct the angles, which is similar to the corrections of satellite station.

4. Which of the following method can be adopted if there is any object in the point of instrument station?
a) Centric station
b) True station
c) Satellite station
d) Controlled station
View Answer

Answer: c
Explanation: The main objective of using satellite station is to place the instrument in the surrounding places of the point where object has been pre constructed. This involves in enhancing technical knowledge and also in improving false stations.

5. Find the true angle from the given figure. 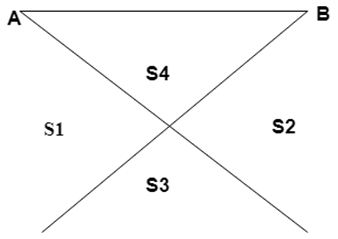 Answer: a
Explanation: The true angle can be calculated by determining the positions of the station points and the remaining points. From the figure, at position S1, the true angle is given as
α = θ + β1 – β2.
advertisement
advertisement

Answer: c
Explanation: A satellite station can also be known as an eccentric station. It involves the following process when a structure is taken as an instrument station, it is not possible to set the instrument over that structure and a false station point is assumed that can be referred as satellite station.

To practice advanced questions and answers on all areas of Surveying, here is complete set of 1000+ Multiple Choice Questions and Answers.